Digesters have come a long way since the 1850s — when the first was installed at a leper colony in India.

Dan DuRuyter has experienced this first hand at his family’s 5000-cow farm in central Washington, George DeRuyter and Sons Dairies.

There he and partners have converted an aging manure digesting system to a state-of-the-art biomethane digester that converts 150,000 gallons of effluent a day into 160,000 million Btu’s of renewable natural gas (RNG) fuel for vehicles.

That’s the equivalent of about 1.4 million gallons of gasoline a year, according to Brightmark Energy, a San Francisco-based waste and energy company and one of the project partners.

DeRuyter says the upgrade will not only reduce the dairy’s greenhouse gas emissions, but also their overall environmental impact. This is particularly useful in the lower Yakima Valley, where dairies are often targeted for elevated nitrate levels in drinking water.

The second-generation dairy farmer tells The Daily Churn the newly refurbished system captures methane from the dairy’s manure lagoon, processes it into RNG and then inserts it into the Willams’ NW pipeline, a 4,000-mile bi-directional transmission system that serves California, Oregon and Washington.

Dan Evans, president of Promus Energy, which converted the DeRuyter digester to RNG, calls the system a “pioneering project” for nationwide dairies looking to the emerging biomethane market to adopt and pay for improved manure management.

“Digesters are a great general tool for dairies,” says Evans. “It doesn’t magically make all of their environmental problems go away, but it provides the center and some of the money and the technology to process manure into other renewable products.”

Initial digester technology adopted over the last few decades primarily focused on producing electricity. But biogas can also be converted to biomethane, or RNG, which has had non-methane elements removed from it to make pipeline quality RNG. 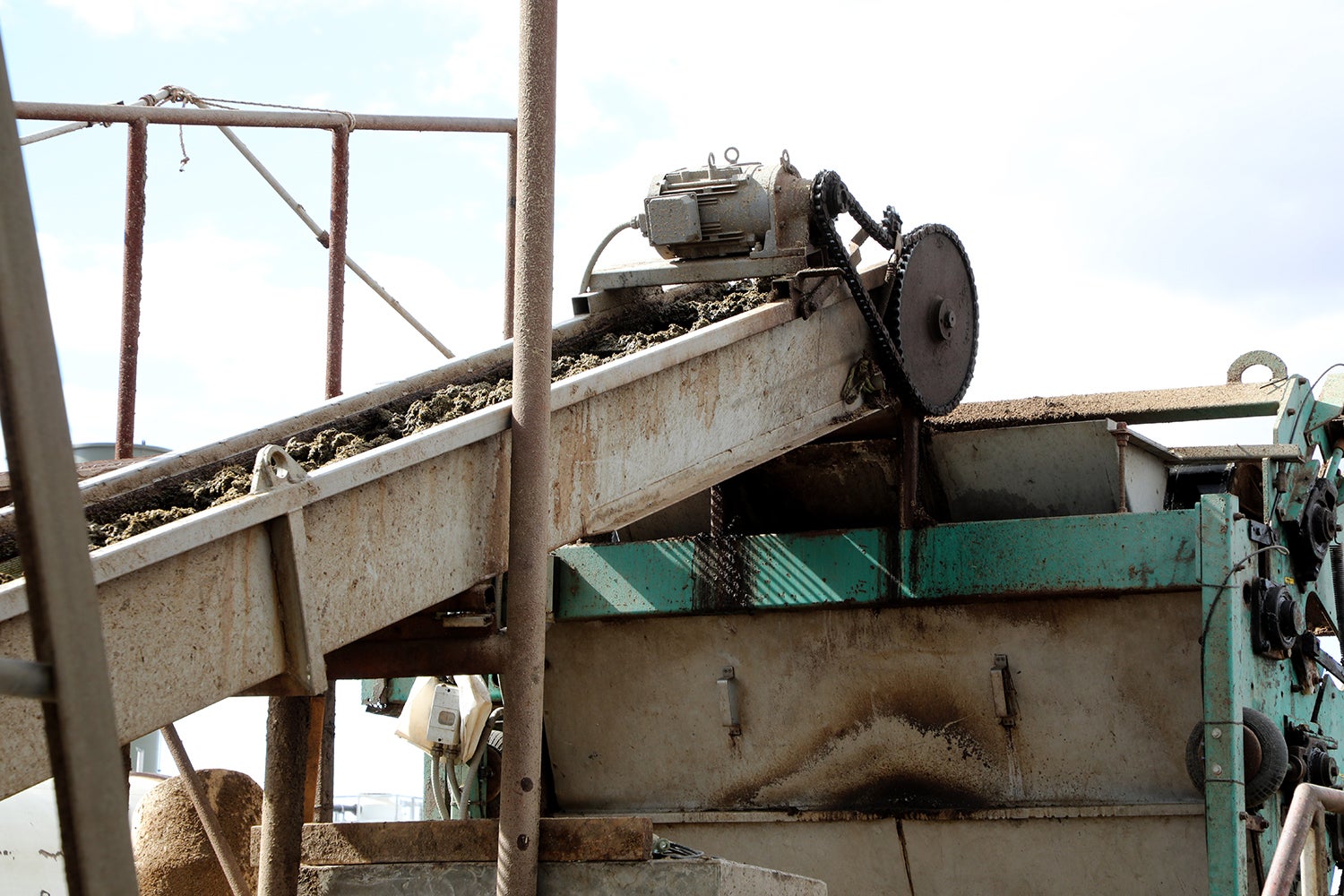 RNG is currently surging in demand, according to an industry report from Bates White Economic Consulting. This is largely because the transportation sector — the number one source of U.S. greenhouse gas emissions — is working to reduce their fossil fuel consumption.

UPS, for example, recently announced plans to invest $450 million in natural-gas-powered trucks through 2022, committing to buying 250 million gallons of RNG over the next seven years to decarbonize their fleet.

The surge in RNG demand combined with advances in digester technology has captured the attention of eight other digester owners across Washington State, according to Jay Gordon, policy director for the Washington State Dairy Federation.

Their technology suffers from similar issues as DeRuyter’s 14-year-old manure lagoon and digester system, adds Gordon — out of date and not penciling out in the current power market.

Dan DeRuyter spent $3.8 million in 2006 on his first digester, which converted methane into electricity he sold to Pacific Power. But changes in the regional power structure resulted in falling prices for his manure-generated electricity.

That combined with a collapsed digester roof in 2017 prompted DeRuyter to take the next step of switching from biogas-to-electricity to RNG pumped straight into a natural gas pipeline.

The second-generation dairy farmer estimates the upgrade will save him more than half a million dollars a year in operating and environmental compliance costs.

California’s commitment to renewable energy helped finalize the DeRuyter partnership and project, Evans says. He is referring to California’s 2017 legislation pledge to extend their emissions reduction targets and low carbon fuels program, thereby incentivizing the purchase of RNG through 2030. 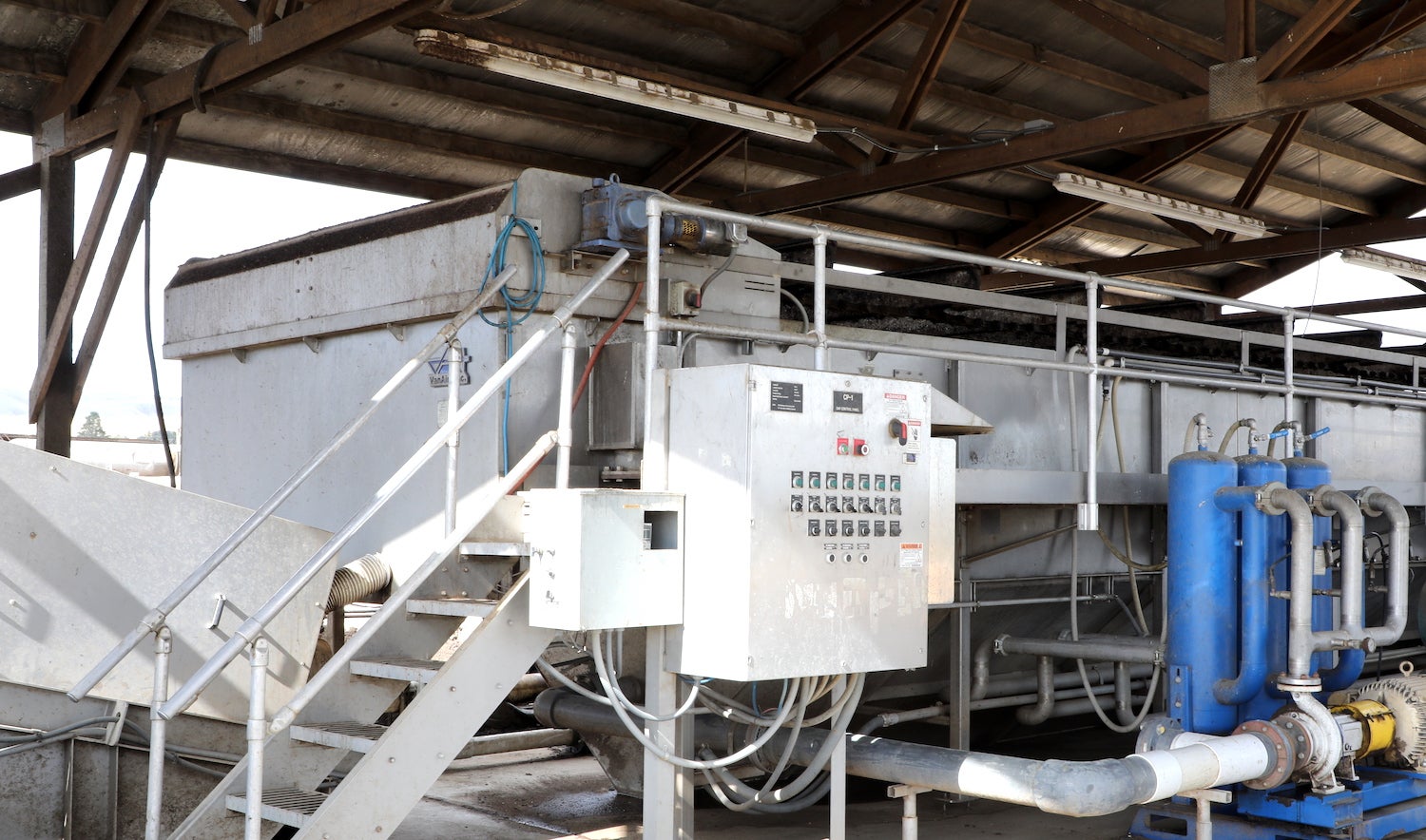 Creating a Yakima County “interconnect” to the interstate pipeline was a key component in the DeRuyter project, he adds. And that access means more local dairies will now have the option of producing RNG.

“It’s been a long time coming,” says Evans, “but the markets are now there so we can finally do it.”

Biogas digesters use an anaerobic process to convert organic waste into renewable, natural gas. This in turn is used to produce heat and electricity, or RNG, according to the Environmental and Energy Study Institute (EESI), a Washington D.C. non-profit supporting sustainable energy policy.

Today the United States currently has around 2,200 operating biogas systems across all 50 states, according to EESI, with the potential to add more than 13,500 new digesters.

Digesters capture methane from organic waste as an energy source, rather than polluting the atmosphere. Methane is of course a potent greenhouse gas with 28 times the warming potential of CO2 — though cattle-produced methane is part of the existing biogenic carbon cycle.

This captured methane can also displace fossil fuels, which pump greenhouse gases into Earth’s atmosphere from carbon reserves that are millions of years old.

Still, not everyone approves of dairy digesters.

The Center for Food Safety, a non-profit promoting organic and sustainable alternatives in the food movement, questions whether digesters are a “Manure pit or Money pit?” They argue that dairy digesters are prohibitively expensive and inaccessible to smaller dairies, encouraging large “mega-dairies” and associated environmental issues.

That’s precisely why dairy-produced RNG is so attractive, argues Evans. He says dairies capture the emissions produced by manure and replaces fossil fuels with a renewable energy source, allowing dairies “to produce renewable natural gas with an ultra-low carbon intensity.” 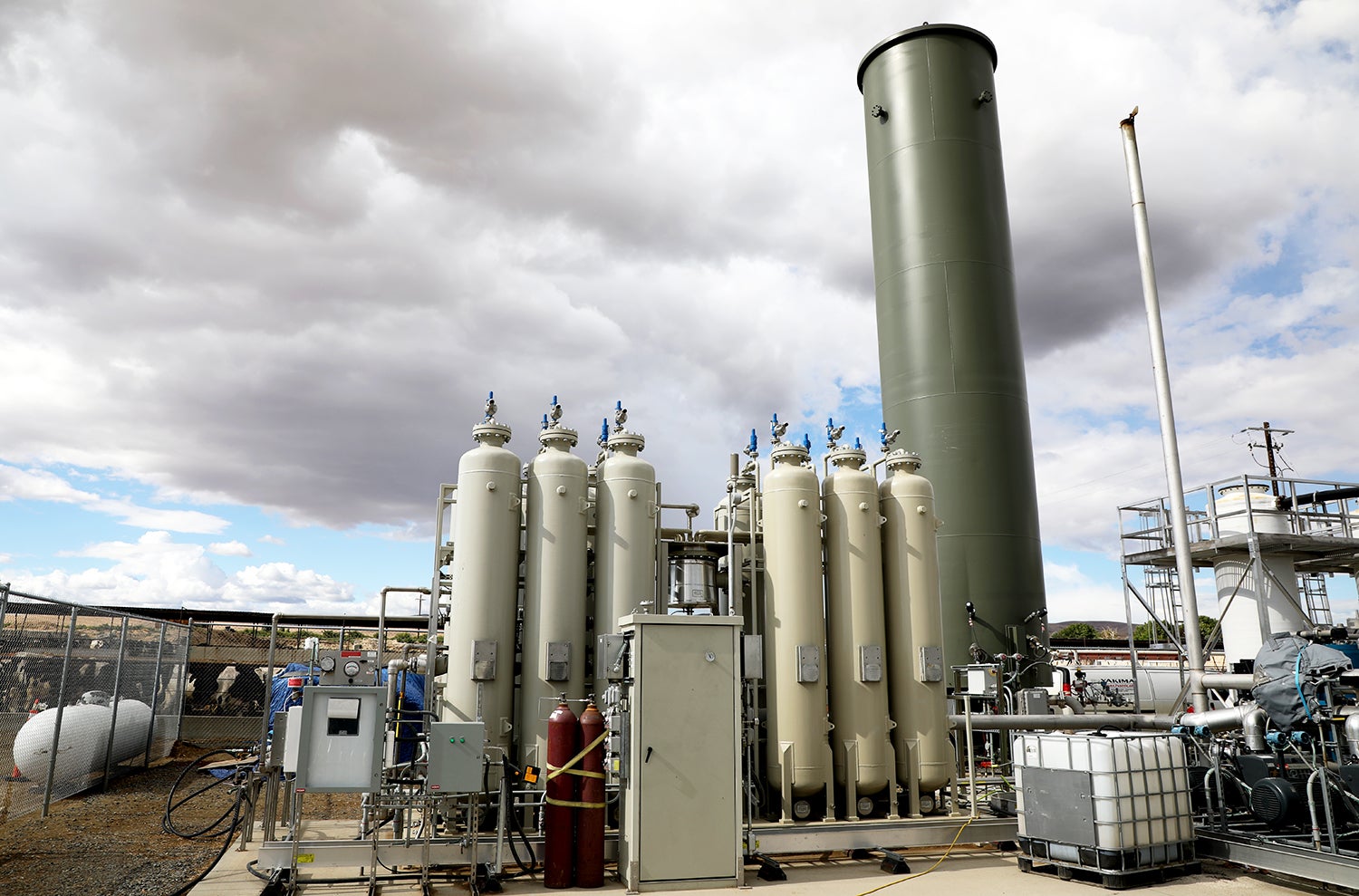 DeRuyter replaced an aging system with the latest advances in RNG-producing technology.

Not only that, he adds, but selling the RNG allows the dairies to invest in applying additional technology that you can’t use with raw manure. It is those after-digestion benefits that most impressed Gordon.

After being anaerobically processed, the dairy screens out the rough fiber for cow bedding. The remaining liquid is then sent through a dissolved air floatation process (DAF), similar to what is used in wastewater treatment plants to remove smaller particles. That creates a very concentrated nutrient, says Evans, which is cheap to transport and apply to crops.

The final step includes a denitrification process that further reduces the ammonia and nitrogen in the remaining water. This can then be used to irrigate fields without the risk of over-applying nitrogen.

For DeRuyter’s part, he is happy to have an operating system that not only pays for itself and eliminates odors for his neighbors, but also helps lead the way for other dairies.

“Most dairy farmers try to be quite progressive,” says DeRuyter. “As new technology comes out and they think they can use it, they spend a lot of money on it. It is amazing how far it has come.”

:: Photos by The Daily Churn