The world’s first floating dairy is “extremely sustainable,” according to founder Peter van Wingerden. Now he says he’s working with the Rotterdam University of Applied Sciences to make it more so by adding wind power. “We [are looking] into several smaller windmills in combination with floating technologies,” van Wingerden told The Daily Churn. Their goal? Generate additional clean power for Rotterdam’s Floating Farm and test more compact and innovative windmills.

Built on a three-story barge in Europe’s largest port and opened at the end of 2018, the dairy currently obtains around 50 percent of its energy from a floating array of 185 solar panels, according to van Wingerden. With the new wind power, he hopes to edge closer to being completely self-sustaining — an essential piece of a story that started in 2012, after Hurricane Sandy hit New York City.

Along with other Dutch engineers, van Wingerden says he was invited to assess the city’s resiliency structure in anticipation of future storms. He was struck by how quickly New York’s shelves were cleared of decent food because flooding made it difficult for delivery vehicles to access parts of the city.

The most essential part of life

“We know that cities have healthy food, fresh food for only two or three days,” he says. “So they are depending on transportation completely.”

Although Hunts Point Food Distribution Center, one of the largest in the world located on a 329-acre site in the South Bronx, was largely spared Sandy’s wrath, van Wingerden said the experience catalyzed new thinking about food distribution amid natural disasters.

“If you know that food is the most essential part of life,” he says, “we thought how can you design something that is independent of all these climate change effects.”

That’s when his team came up with the idea of building a floating farm back home in the Netherlands.

“One of the guys says: ‘let’s start with the most difficult part. That is: how to handle big animals on a farm that floats inside the city.'” 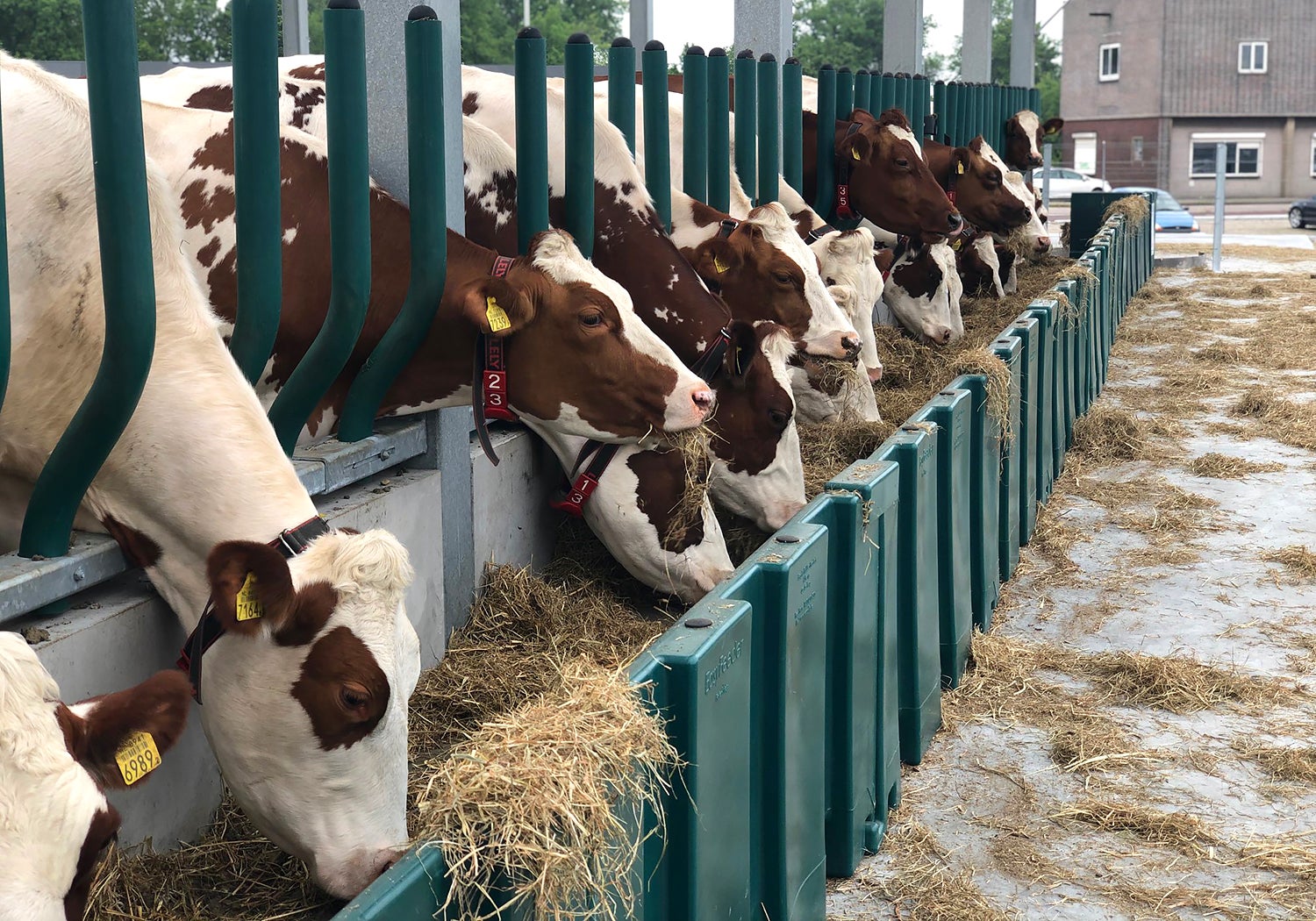 After several design iterations, the team settled on building a high-tech dairy with 35 red-and-white Meuse-Rhine-Issel cows, complete with Levy milking robots, an automated feeding system and a smartphone app that Reuters says allows farmer Albert Boersen to monitor his cows.

The dairy also processes all of its own milk and manure on board. They pasteurize and bottle around 200 gallons of milk per day, or turn it into yogurt. All of the products are sold locally at the Spar or Picnic, an electric grocery delivery bus, reducing what van Wingerden calls “food pollution” — the emissions associated with transporting food.

Manure is separated into liquids and solids. The solids are converted into organic compost that is then used as fertilizer in various Rotterdam parks, and van Wingerden says he is working with a different Dutch university to devise innovative methods for dealing with the cows’ urine — all part of a broader initiative across Rotterdam to apply bold new thinking to contemporary urban challenges.

Arnoud Molenaar, the City’s Chief Resilience Officer, says Rotterdam wants to become a resilient city. To that end they launched their first Climate Adaptation Strategy in 2013 and broadened their mission in 2016 with the Rotterdam Resilience Strategy.

As early as 2013, the City identified floating infrastructure as an official response to the challenge of rising sea levels. This is particularly pertinent for what Molenaar calls a delta country that lies downstream of several European rivers.

“The water is coming from all directions and doing nothing is not an option,” he says.

Molenaar says Rotterdam has been transitioning several old harbors for residential or non-industrial purposes to demonstrate the possibility of using water as part of the new landscape. To generate awareness of this potential, in 2010 the City approved construction of a floating pavilion comprised of three transparent domes. This was supposed to be the first step towards creating a floating district, but the idea never took off — until now.

With construction of the floating farm bringing renewed attention to Rotterdam, he says they are seeing a new impetus to expand Molenaar’s original plan. Rotterdam is now planning to develop 18 new floating houses in an adjacent harbor and next year they expect to open a floating office in Rijnhaven to host the Global Center on Adaptation.

But the ultimate way of development, he says, “is when you can do it in a self-sufficient way.” 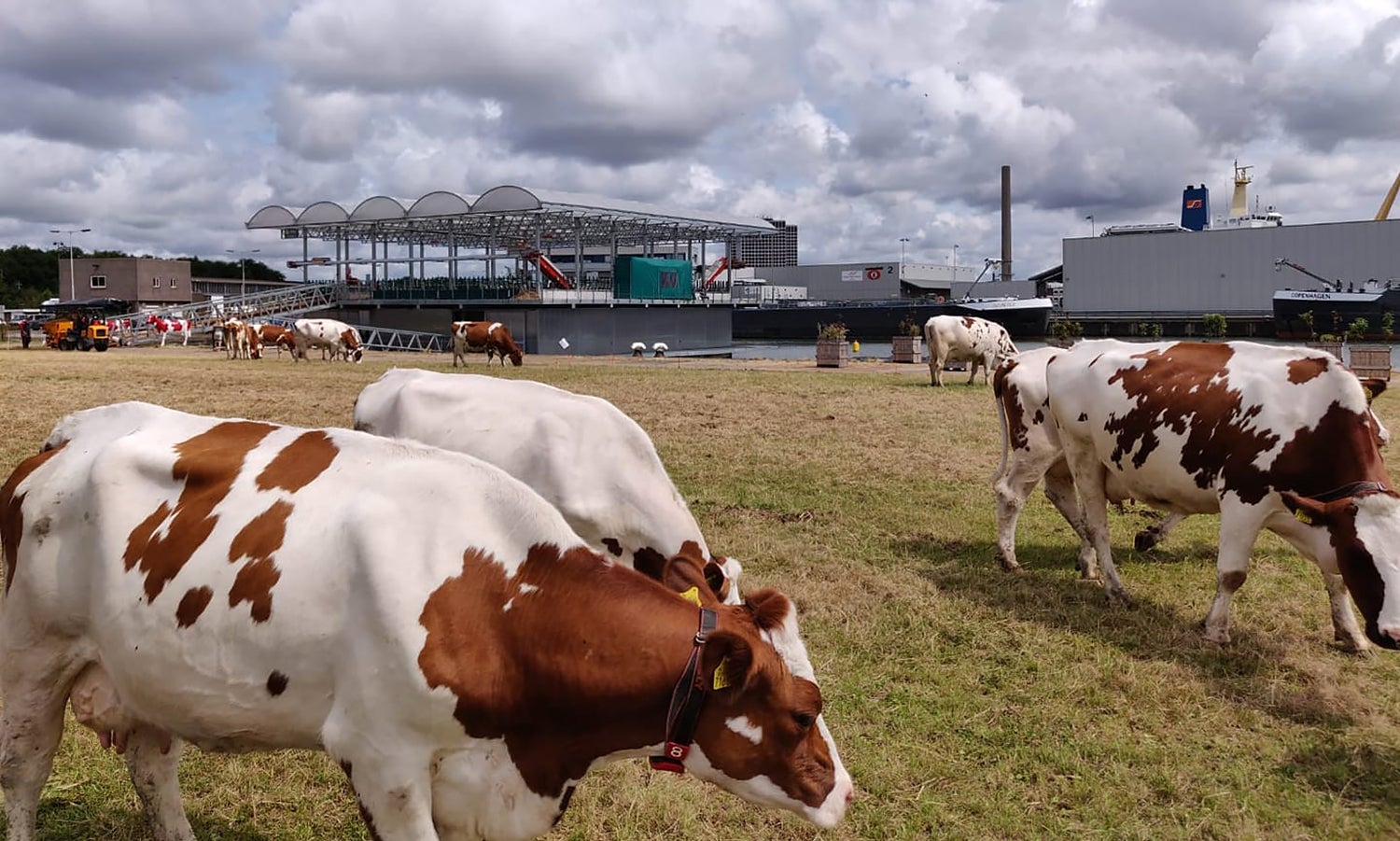 Thinking outside the box

Adriaan van der Giessen, a City project manager who specializes in managing issues surrounding food and smart cities, says the “Floating Farm is a very good example of literally thinking out of the box.”

He says the project draws attention to several issues, including how to bring food production inside the city.

“For the Netherlands it is quite unusual because there’s a lot of food production on the rural side,” he says. But urban land prices are typically too high to produce food inside cities . “But of course,” he adds, “water is a very cheap place to rent because there aren’t many users on the water.”

Given the amount of media attention the Floating Farm has received, van der Giessen says Peter has done a good job of raising awareness — but not everyone is thrilled with the idea of having cows inside the city.

To dairy or not to dairy

Ilke Krouwels argued on the dairy’s Facebook page in August, 2018 that the project is completely unnecessary. “They act like this is progress,” she writes in Dutch, “but it’s not real progress as long as there is still deployed on the old vision of food. Namely with animal products.”

On the other hand, Hubert Buschmann wrote, “You must have seen it. The cows are totally relaxed and make a satisfied impression.”

Overall, van der Giessen says the recent Boeren protest — when hundreds of farmers drove their tractors into The Hague to protest against what they say to be unfair treatment over their perceived environmental footprint — demonstrated “a very large support” towards farmers across the country.

He adds that despite a slow shift among a certain sector of society towards a more vegan lifestyle, “there will always be a large production of dairy products in the Netherlands because it’s also an important export product.”

Back on board, van Wingerden is unfazed by naysayers. Hoping to install the new wind energy as soon as spring 2020, he says his modular dairy is both financially viable and scaleable.

“We don’t damage the environment,” he adds. “We don’t build on the land. We don’t change land into concrete. We are on the water.”

All images via Floating Farm