Add to the list of services U.S. dairy cows perform: diverting millions of pounds of food waste from landfills.

Cows in the Midwest, for example, consume up to 41 different byproducts, according to a University of Wisconsin-Madison review, including sweet corn cannery waste, vegetable tops and trimmings, potato waste and even pasta.

Luiz Ferraretto, Assistant Professor and Ruminant Nutrition Extension Specialist at the University of Wisconsin-Madison, says some byproducts have become so commonly used, like dried distillers grain leftover from the ethanol industry, they are now considered a “common feed.”

This is noteworthy given that the U.S. Department of Agriculture (USDA) estimates up to 40 percent of the food produced in this country goes to waste. In 2010 that equated to about 133 billion pounds of food worth $161 billion. 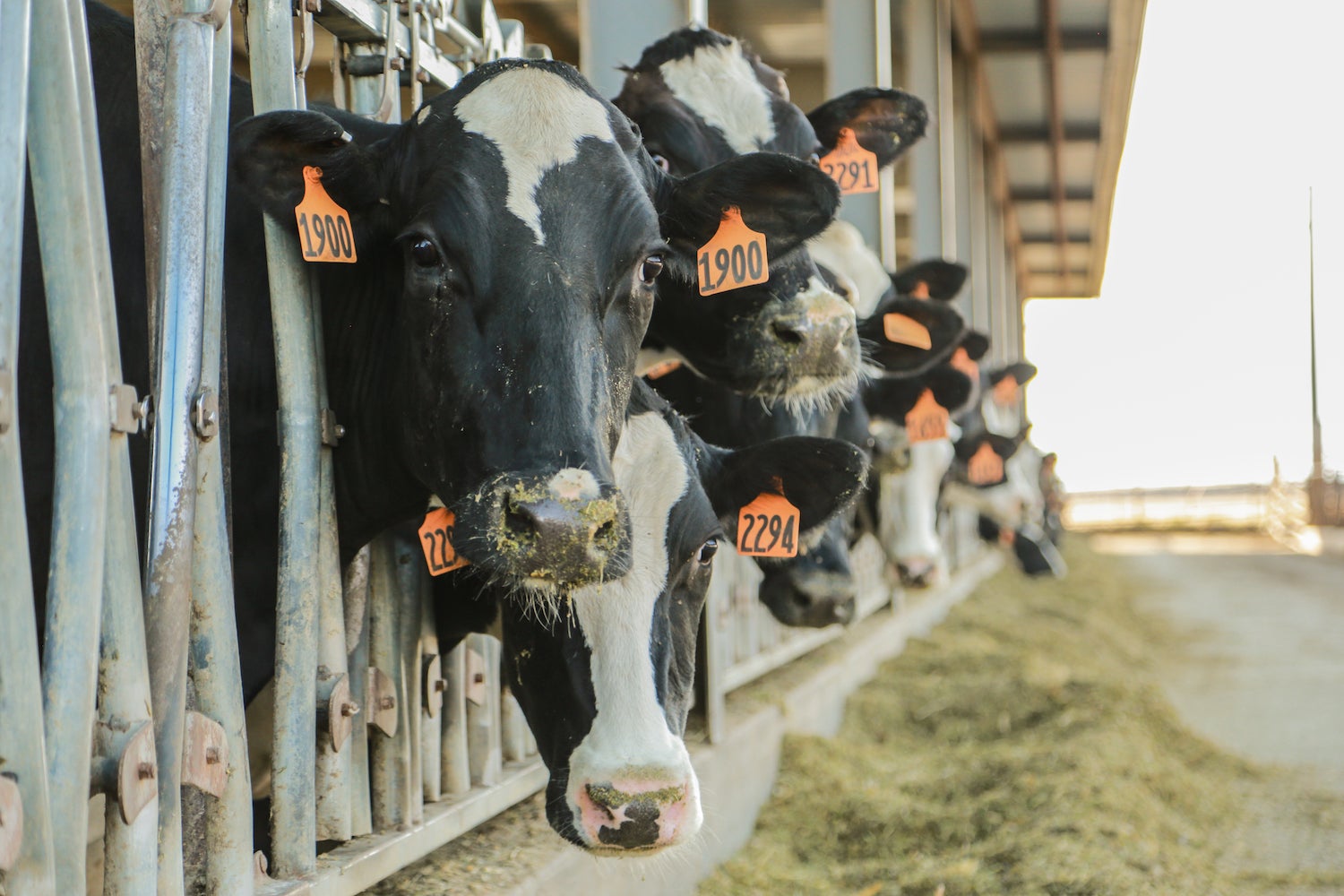 Cows turn byproducts into milk, meat and manure — an extremely valuable asset on any farm.

Then there’s the environmental impact. The Food and Agriculture Organization of the United Nations (FAO) estimates that food loss and waste accounts for 8 percent of global anthropogenic greenhouse gas emissions — almost as much as global road transport.

“This is a huge service to society that our cows do,” says Dr. Frank Mitloehner, PhD, air-quality expert and UC Davis animal science professor. “They take something that normally would go to the landfill or decompose onto the farm as waste and make it into very highly valuable and digestible human foods such as dairy, butter and yogurt.”

While waste occurs at all stages of farm-to-fork food production — including groceries that rot in household fridges — experts say dairy cows’ consumption of byproduct waste comprises their most significant contribution to reducing potential landfill emissions.

For U.S. food manufacturers, animal feed is a “top diversion,” according to a 2016 survey conducted by the Food Waste Alliance.

“Animal feed can be a great alternative to other recycling or disposal options,” says Jackie Suggitt, Stakeholder Engagement Director of ReFED, a nonprofit working with businesses, foundations and government leaders to reduce U.S. food waste.

“It not only reduces the amount of food going to landfill, and therefore the associated GHGs,” she says, “but also reduces grower costs of purchasing feed and the production of new product that goes into making it.”

Not all of that diverted byproduct goes to the dairy industry, of course; some goes to feed other livestock, including pork and poultry. But a “significant” portion is used up by U.S. dairy, says Paul Davis, PhD, Director of Quality, Animal Food Safety and Education at the American Feed Industry Association.

Up to 30 percent of a U.S. dairy cow’s diet is made up of human inedible “byproducts feedstuffs,” according to a  joint study published by researchers at Kansas State, Texas A&M and Michigan state university. 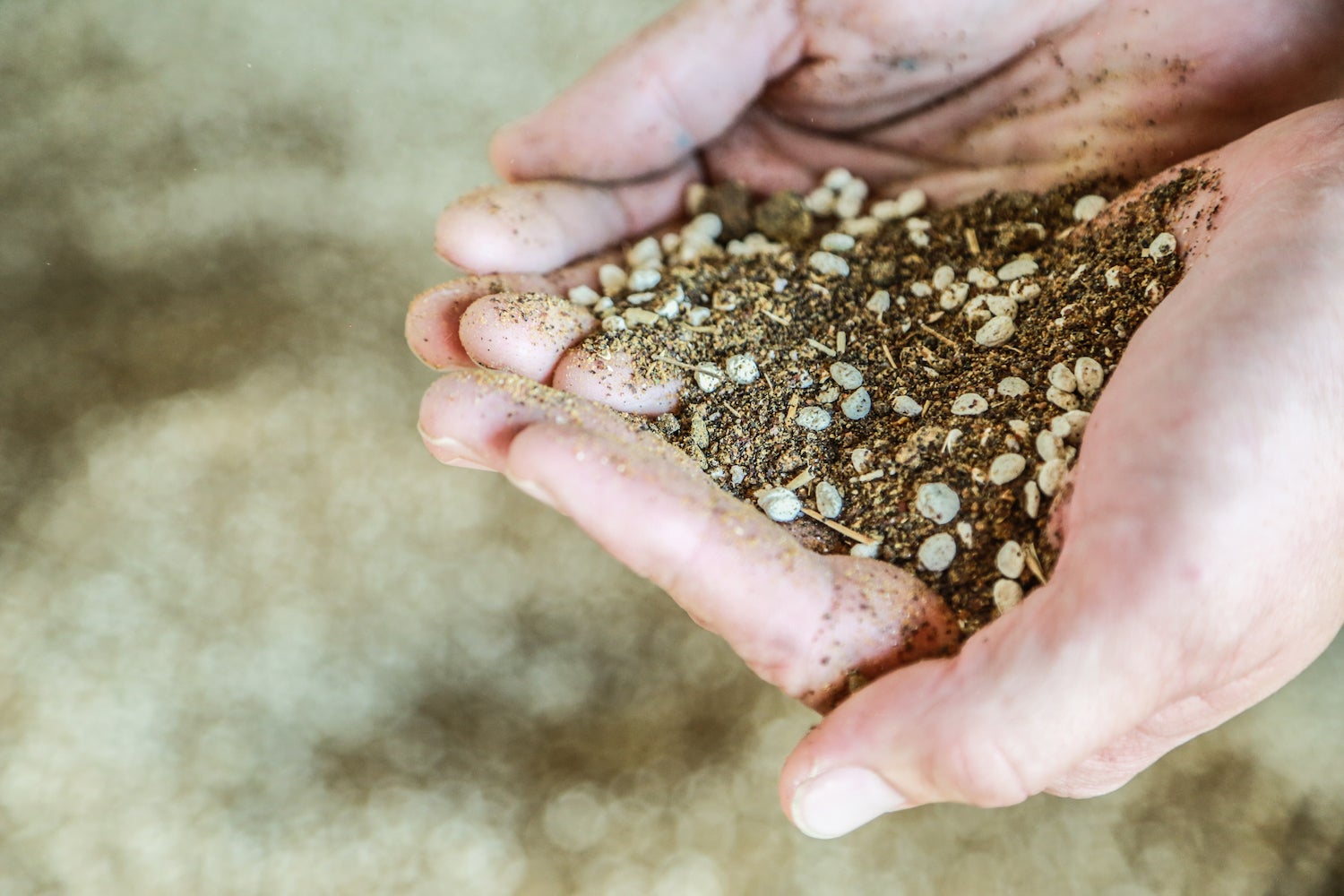 Cows can upcycle everything from cotton and almond hulls to spent grain from breweries.

With high-producing cows consuming an average daily ration of 110 pounds of wet feed a day, according to Mitloehner, dairy cattle feed diverts an approximate 204 to 306 million pounds of waste byproducts every day.

In California, the highest dairy-producing state in the nation, dairy cows do even more to reduce waste,  with up to 40 percent of a dairy cow’s diet coming as byproducts diverted from the state’s agricultural manufacturers, according to the California Dairy Research Foundation. This includes a whopping two million tons (or four billion pounds) of California-grown almond hulls. Most dairies consult a professional nutritionist to ensure their cows’ diet is perfectly balanced for health and performance.

Davis, from the American Feed Industry Association, explains cows’ remarkable ability to upcycle waste products is thanks to one main evolutionary advantage—the rumen.

This four-part digestive system gives cows, and other ruminant animals like sheep, goats, bison, elk and deer the ability to digest highly fibrous materials humans and other monogastric animals, like pig and poultry, can’t.

Davis says “(the rumen) is a beautiful animal machine factory that takes these coproducts and those human waste foods, converts them and comes out with a high-quality source of food.”

Of course, cows still need long-stem fibers and forages, such as grass and hay, to achieve “rumen health,” says Davis. But the remainder of their dietary needs can come from a wide variety of sources.

That unique digestive system combined with the intensively managed dairy production dominating the U.S dairy business is why dairy cows consume more waste byproducts than beef cattle, he adds.“A lactating dairy cow eats maybe two to three times a day,” according to Davis. “They are much more dependent on humans to be fed daily versus beef cattle on pastures.”

While animal feed has played an essential role in reducing the waste stream to date, there are plenty of opportunities to divert more, ReFed notes in their  proposed solutions for food waste reduction.

Especially higher up in the retail food stream, ReFed points to the potential diversion of an additional 49,000 tons of waste and 34,000 tons of greenhouse gas emissions by sending food waste from grocery stores and restaurants to animals.

Also important, says Luiz from the University of Wisconsin-Madison, is to avoid feeding dairy cattle anything humans could consume directly.

That’s why, he adds, scientists and research departments like his continue to look at byproduct feed solutions for dairy cows to ensure more sustainable food production for a growing world population.

Cows – making the best of a bad situation (“40% of food produced goes to waste”!)

If all farmers around world cities can embrace this,i issues of Green House gas would be solved as food byproducts will be diverted to dairy supplements