It all starts with farmers thinking holistically, says Griffin, something she experienced firsthand back home when she began adopting regenerative practices in 2009.

“You’re looking at your farm management system from the science of ecology, instead of the science of chemistry,” she says. “When you look for shooting stars you look at the whole sky, you don’t look at just the stars.”

Agriculture is a source of greenhouse gas emissions contributing to climate change, according to NASA’s Global Climate Change initiative. In the US, agriculture contributed 10 percent of all emissions, according to the US Environmental Protection Agency (EPA). Globally the agency lumps agriculture with forestry and other land use; combined they emit roughly a quarter of all greenhouse gases warming the planet.

Regenerative agriculture proponents like Griffin argue it’s possible to reverse that trend with dairy pasturelands acting as carbon sinks, much like the world’s ancient grasslands. But how much carbon this system can sequester remains in question: estimates range from 322 billion to one trillion tons per year.

“New Zealand’s waterways are under massive pressures and it was something that happened really fast,” says Nicole Masters, New Zealand agro-ecologist and author of For the Love of Soils: Strategies to Regenerate our Food Systems. “We went from large flowing rivers you can swim in to trickling streams that were full of algae and unswimmable.”

“It was the industrialization of the New Zealand landscape really,” she adds. “Dairy became everywhere even where it was unsuitable for dairy production.”

The New Zealand dairy industry has expanded rapidly over the last few decades, increasing 70 percent nationally from 3.8 million dairy cows in 1994 to 6.5 million in 2017, according to the New Zealand farm census. These rising cattle numbers put increasing pressure on the island country’s limited farm acreage. 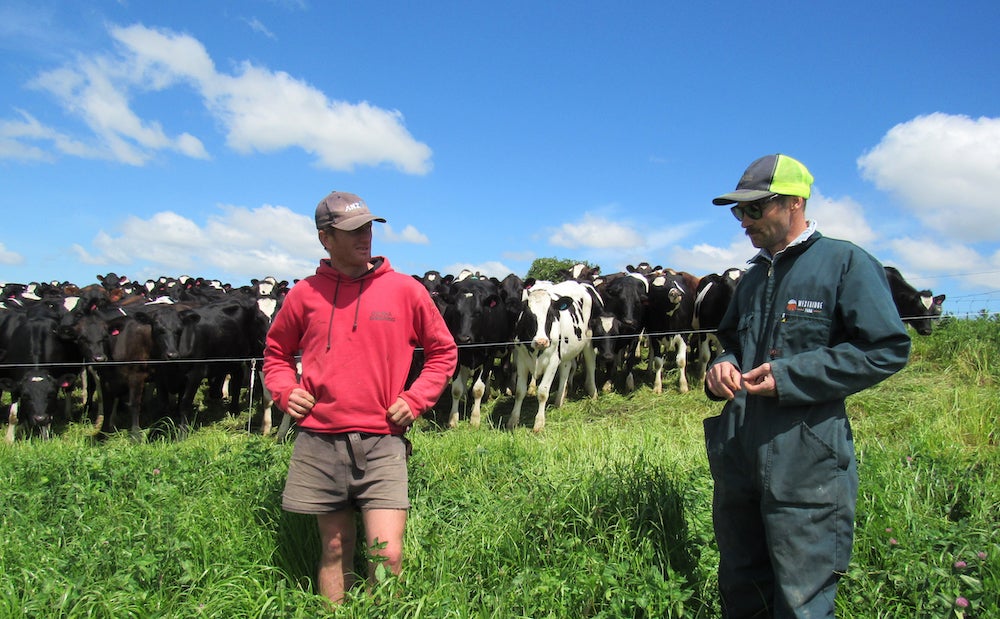 Dairy farmers Simon Bradfield and Mark Anderson inspect a regeneratively-grown pasture with their ‘mob’ of Holsteins in the background.

Yet high density cattle numbers can be a boon for regenerative grazing, as long as they are encouraged to graze as a ‘mob,’ according to adherents. Herds are encouraged to lightly graze paddocks, but in dense numbers. Ideally they take just one bite off the top of lush, green pastures before farmers move them on.

Meanwhile, the manure the cows leave behind, combined with their hooves trampling down tall grass into a thick, soil-covering blanket, creates an ideal habitat for decomposing organic matter to feed the “soil food web,” according to the US Department of Agriculture’s Natural Resources Conservation Service. This encourages grasses to rebound quickly—and reseed diversely.

It’s all part of an ancient, natural cycle in which large herds of grazing herbivores (like bison in the North American plains or gazelle in Africa) played a vital role, adds Masters.

“If you look at where the deepest soils in the world are they all evolved alongside grazing animals, large large herds,” she says. “Those grasslands have been around for a long-time, pre-mammals, but the explosion of grasses really coincided with the explosion of diversity in herbivores.”

Wisconsin researchers say conventional dairy farmers put less cattle on larger pastures for longer stretches of time than with mob grazing. As a result, grass is typically grazed down to ankle height before cattle are moved.

Albeit a step up from pastures that aren’t rotated, the longer rotation leaves grasses struggling to recover and eventually decreases a pasture’s nutritional quality, both Griffin and Masters argue. Cows managed in a ‘mob’ have the opposite effect, creating a verdant, biodiverse and highly-nutritious pasture.

Some of their claims are hotly debated, including Savory’s argument that regenerative grazing can reverse desertification. Still, Griffin and Masters are convinced that regenerative dairy farmers can actually increase their soil health faster than beef ranchers who manage thousands of acres.

Dairy farmers have “better control” over their pasture management, according to Masters, because they are already managing and moving their cattle for milking.

“This ends up being an opportunity. Dairy farmers can build soil faster. Better control, better rotations and better systems are set up,” she says. “If you want to move five times a day, then knock yourself out.”

John Legg, another Kiwi farmer who learned about regenerative grazing from Masters, also saw it as an opportunity to save money and improve his farm’s watershed. 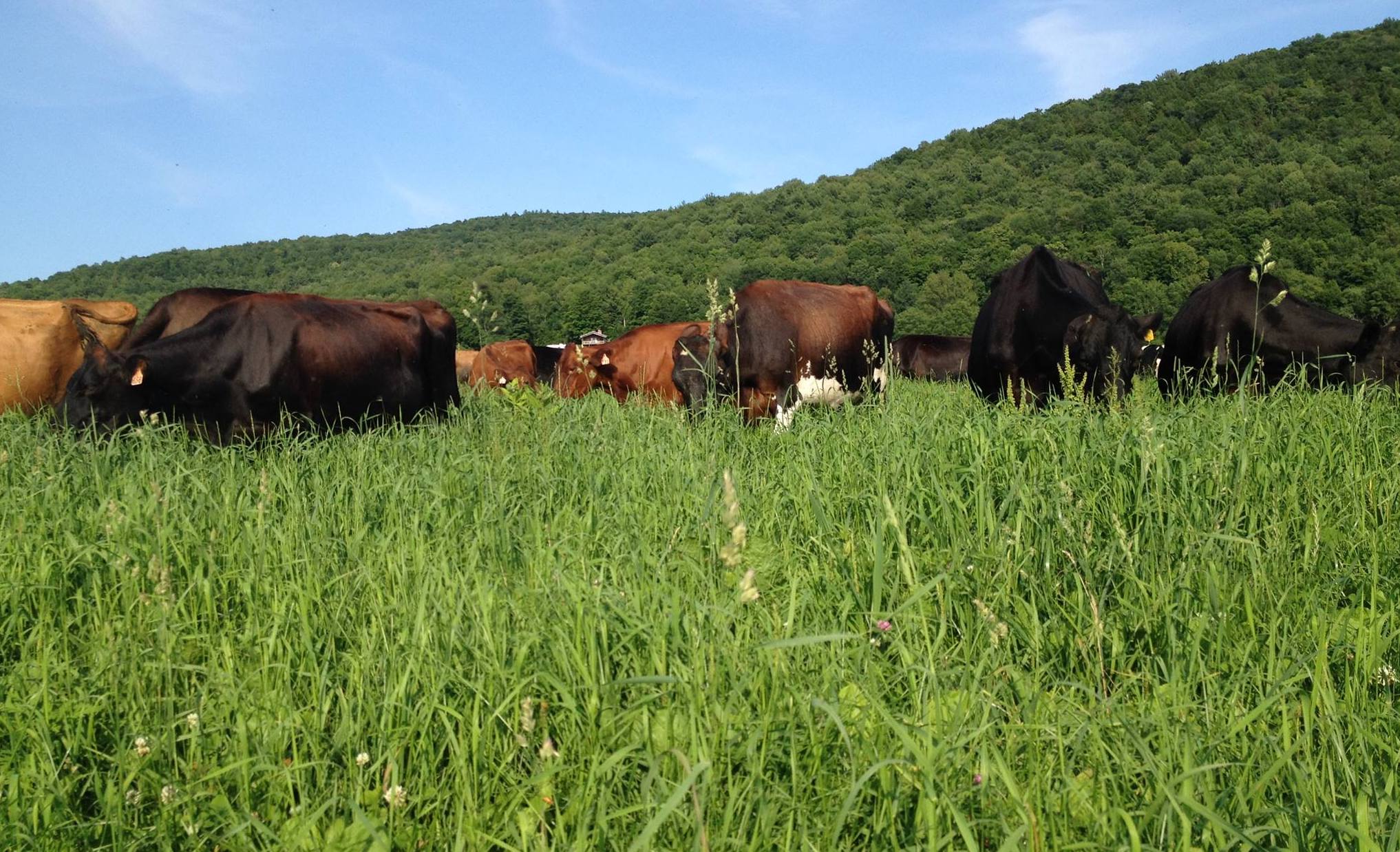 Following in his family’s footsteps

Legg’s fourth-generation mixed-animal farm, which includes a 100-head of Ayrshire cows, is located on the ecologically-sensitive shores of Lake Ellesmere on New Zealand’s South Island. After just three years of regenerative grazing, Legg won the 2019 North Canterbury Fish and Game’s Working with Nature Award — given to farmers whose practices help protect nearby streams and rivers.

Just 32 and a former professional rugby player, Legg’s most immediate concern when he returned to the family business was the farm’s finances. Masters’ teaching offered him a potential solution that reminded him of what he learned growing up.

“I was listening to what she was doing,” Legg says, “and I thought, far-out, a lot of this is what I’ve been taught by my dad.”

Legg started by switching to using only natural fertilizers and cover crops to support the soil’s sensitive microbial life. Then he began increasing the number of livestock on his pastures and intensified their rotations.

Though he still has many more plans to improve his pastures regeneratively, Legg said his cows are already producing more milk at a better quality than they have for years. Plus has seen less lameness and milk fever.

With his soil health rebounding, Legg estimates he only had to irrigate for about six weeks during the past summer. A neighboring farm reportedly ran theirs for months longer.

This isn’t surprising, Masters says, since regenerative grazing reduces soil compaction, increasing its ability to hold air and water. On farms that observe regenerative grazing practices, she has seen an inch of water soak into the ground within 30 seconds, compared to sometimes half an hour with compacted soils.

Legg is happy to demonstrate how dairy farmers can help rehabilitate their local watersheds.

“It really is a matter of embracing natural systems and making that work for the farm,” he says. “You look at regenerative agriculture and you start to realize that nature is diverse, and it needs that diversity to function.”

:: Images via Next Level Grazing

This is a most interesting point of view. A lot of people consider NZ pasture is being over-dairified – too many dairy farms on sometimes unsuitable land.

A most interesting article. Many people consider that NZ pasture has been over-dairified.