New methane math could take the heat off cows

Oxford University researchers are pushing for a new method of measuring greenhouse gas emissions and their warming impact.

Myles Allen, Ph.D., a professor of Geosystem Science and head of the Climate Dynamics Group at Oxford Martin, University of Oxford, has a beef with how the impact of methane emissions on global warming is wrongly calculated — and then misconstrued to blame livestock for climate change.

He and his Oxford Martin colleagues have proposed a new metric called GWP* (global warming potential – star), which focuses on the warming effects of the different gases, rather than their rate of emissions. The current mischaracterization of methane’s impact on warming, Allen told The Daily Churn, ignores the “white elephant” in the room — fossil fuel-based carbon dioxide emissions. This in turn could lead to misguided policies that inaccurately target animal agriculture.

“If we all turn vegetarian, but we don’t do anything about fossil fuel emissions, in five years we’ll be in exactly the same position we were before,” Allen says of rising global temperatures. But “we’re vegetarians.”

Methane is a potent greenhouse gas, second only to carbon dioxide, according to the European Union’s (EU) draft plan on curbing man-made methane emissions. Globally, livestock contribute 14.5 percent of total annual greenhouse gas emissions, with methane comprising 44 percent of that, according to the United Nations Food and Agriculture Organization (FAO) report “Tackling Climate Change Through Livestock.”

But Allen argues any discussion about methane emissions must include how it works differently in our atmosphere than the primary climate change culprit—carbon dioxide. 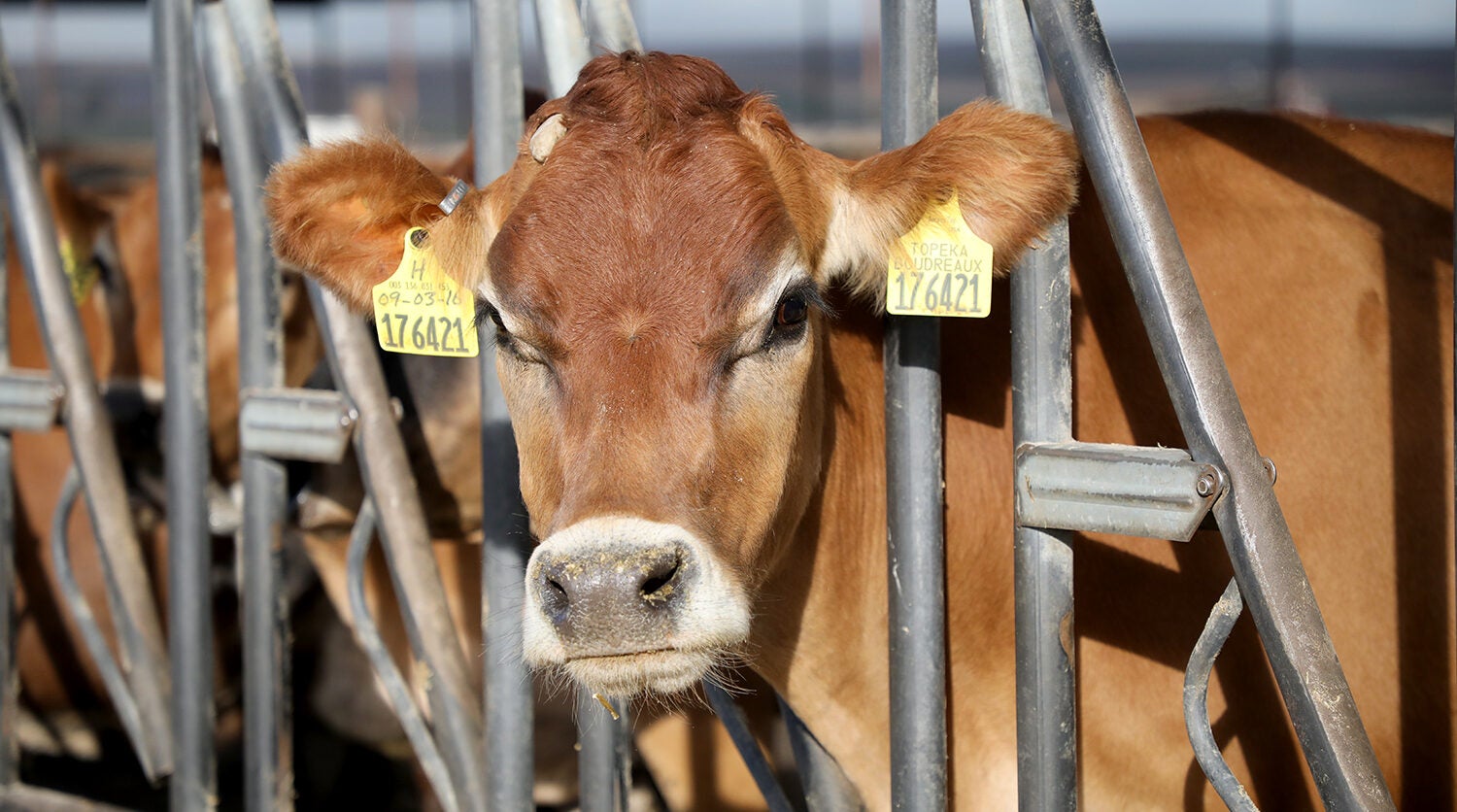 Using the current method of calculating emissions while pursuing global temperature goals risks “eliminating practices, such as ruminant agriculture, that are not actually causing global warming,” Allen wrote in recent comments submitted to the draft EU methane strategy. The new EU methane strategy had not been finalized as of the time of this story.

Farmers across the globe have come on board to support Allen’s suggested GWP* metric. The National Farmers Union, National Sheep Association, Beef and Lamb New Zealand and other farming organizations signed a joint statement urging the sixth version of the IPCC currently being written to adopt the new GWP* system and fix “inaccurate greenhouse gas calculators.”

Methane is a short-lived, “flow gas” in our atmosphere with 28 times the warming potential of CO2. But for a short time, only 10 years, according to the UC Davis Center for Clarity and Leadership in Environmental Awareness and Research (CLEAR).

Carbon dioxide, on the other hand, is a “stock gas.” It persists in the atmosphere for hundreds of thousands of years, creating a cumulative effect, Allen says. That means each ton of CO2 released adds more warming than the ton before it, and so on.

Even though methane initially has a more significant warming effect than CO2, because it dissipates from the atmosphere in a short time, it creates a “pulse” effect on global temperatures when a new, additional source of methane is released. Versus the cumulative effect of CO2 releases. As long as methane emissions don’t increase — if herd sizes stay stable, for instance, then Allen explains temperature increases caused by methane won’t keep building up because the methane is oxidizing from the atmosphere as it is being added. 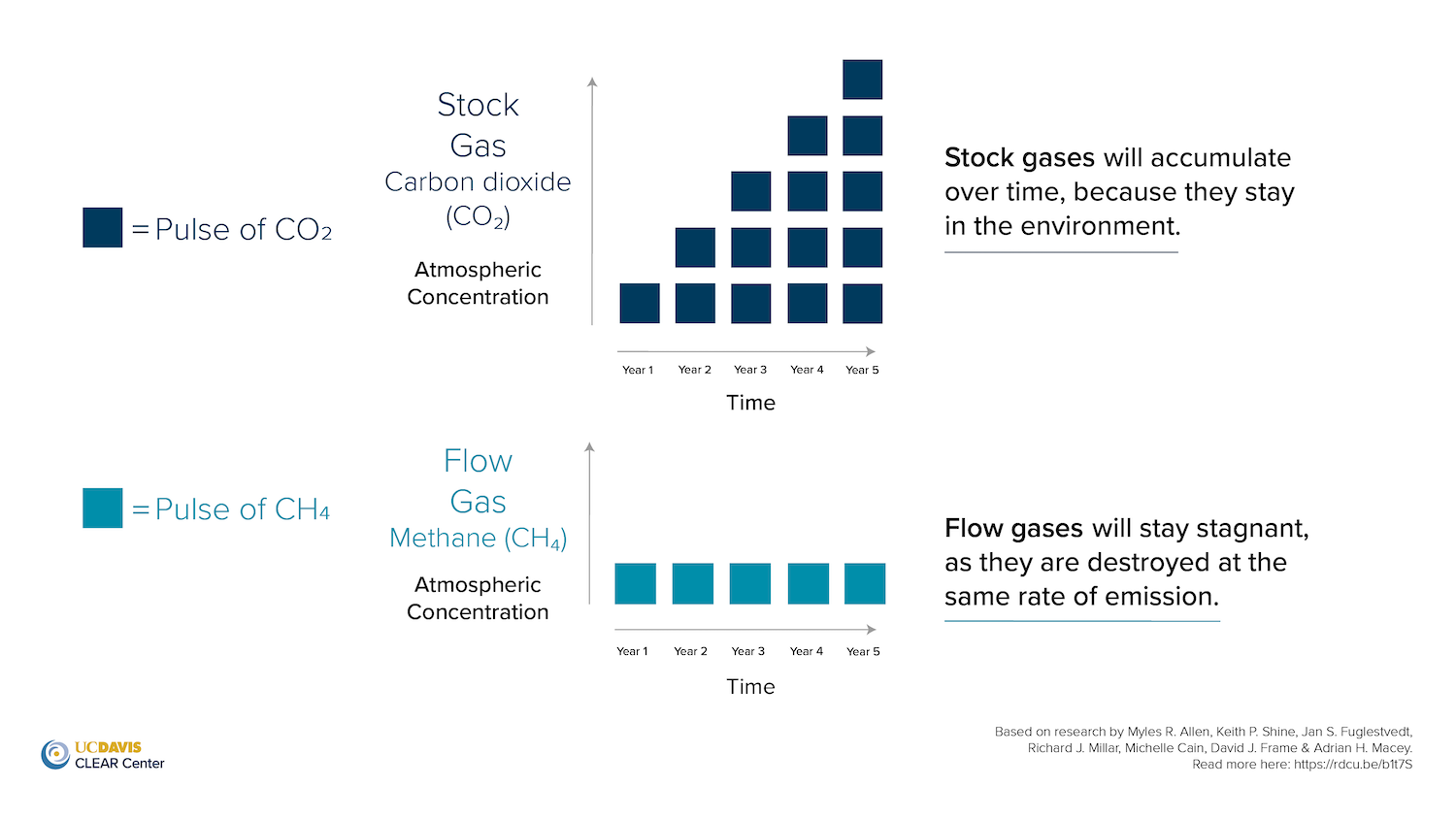 The problematic measurement system currently used — commonly called carbon equivalency, or GWP100 — compares all of the greenhouse gases against the warming potential of carbon dioxide over 100 years to get a measurement of the rate of transmission for all greenhouse gases. But methane doesn’t impact temperatures for hundreds or thousands of years the way carbon dioxide does.

This miscalculation is nothing new to the science community and has been long recognized as “problematic,” according to Allen. It resulted from early climate change policy and an effort to create a simple metric that could compare all greenhouse gases within one straightforward measurement (and potential trading) emissions system.

“It was sort of good enough-ish,” Allen says. “And to be honest, as long as you knew (total) emissions were going up, it didn’t really matter, you knew you had to do something, which was to bring them down.”

But, in real-life application, Allen says, that metric under-estimates the short-term impact of a new source of methane on global temperatures and also overestimates methane’s impact over time, which is a problem when you have global policies focused on limiting total temperature increases.

Andrew Morrison, chairman of Beef and Lamb New Zealand, said in the March 6, 2020 podcast below by FAI Farms that sticking with the status quo and using the GWP100 metric in climate change policy means that “agriculture would be the only industry on the planet that is being asked to not only to deliver net-zero but to go further and deliver global cooling in the same time frame.”

Under the GWP* formulation, livestock herds that are not increasing in size are causing global warming, according to Allen, “but at only one-quarter the rate that is implied by the current carbon-equivalence metric.”

Even more profound, says Allen, if livestock farmers can reduce their methane emissions, either by reducing their herd size or using methods like special feed additives, they can draw down carbon from the atmosphere and induce global cooling. That will create the same effect on global temperatures, he adds, as planting a field of trees to sequester carbon.

“Rather than seeing livestock farming as a problem, we should see it as a massive opportunity,” to reduce global warming and offset other emissions, he says. But that doesn’t mean letting fossil fuel emitters off the hook.

Allen is careful to note that any discussion of livestock methane emissions must recognize that inducing global cooling only works if herd sizes are not increasing. And that there are other greenhouse gases (including carbon dioxide and nitrous oxide) produced in livestock production that have to be considered. He calls for a holistic approach to climate change policy to fix livestock production’s other problems.

At the end of the day though, Allen says, if we don’t address fossil fuel emissions, it won’t matter what reduction measures policy makers take, or how they measure methane, when it comes to curbing rising temperatures.

“Fossil fuel emissions are driving up global temperatures by two-tenths of a degree a decade,” he says. “Until we stop doing that, everything else is kind of moot.”

Holistic approach to understanding GHGs is plausible. And the GWP100 should address other sources of atmospheric pollution.