HydroGreen creates high-tech automated hydroponic systems to daily sprout wheat or barley seeds with only water and light – no soil or fertilizers needed – creating a type of feed known as fodder.

With half of western U.S. states currently facing “extreme” or “exceptional” drought conditions, according to the U.S. Drought Monitor, some proponents say farming indoors is one way to produce more food using fewer resources.

Feeding fodder is a centuries-old concept according to HydroGreen, a division of the ag-tech company CubicFarm® Systems. But what makes their system unique, they say, is its simplicity and full automation.

Rancher Dihl Grohs founded the company in 2015 after developing a low-maintenance concept that results in high-quality fresh feed for his animals — even in water-scarce western states.

Perrotin says their system could also be appealing in places where land is prohibitively expensive and hard to access—like Brazil, where, according to the Climate Policy Initiative, farmers are heavily incentivized to conserve land.

“They will find a very keen interest in this technology and what it’s capable of doing for them,” Perrotin tells the Daily Churn. 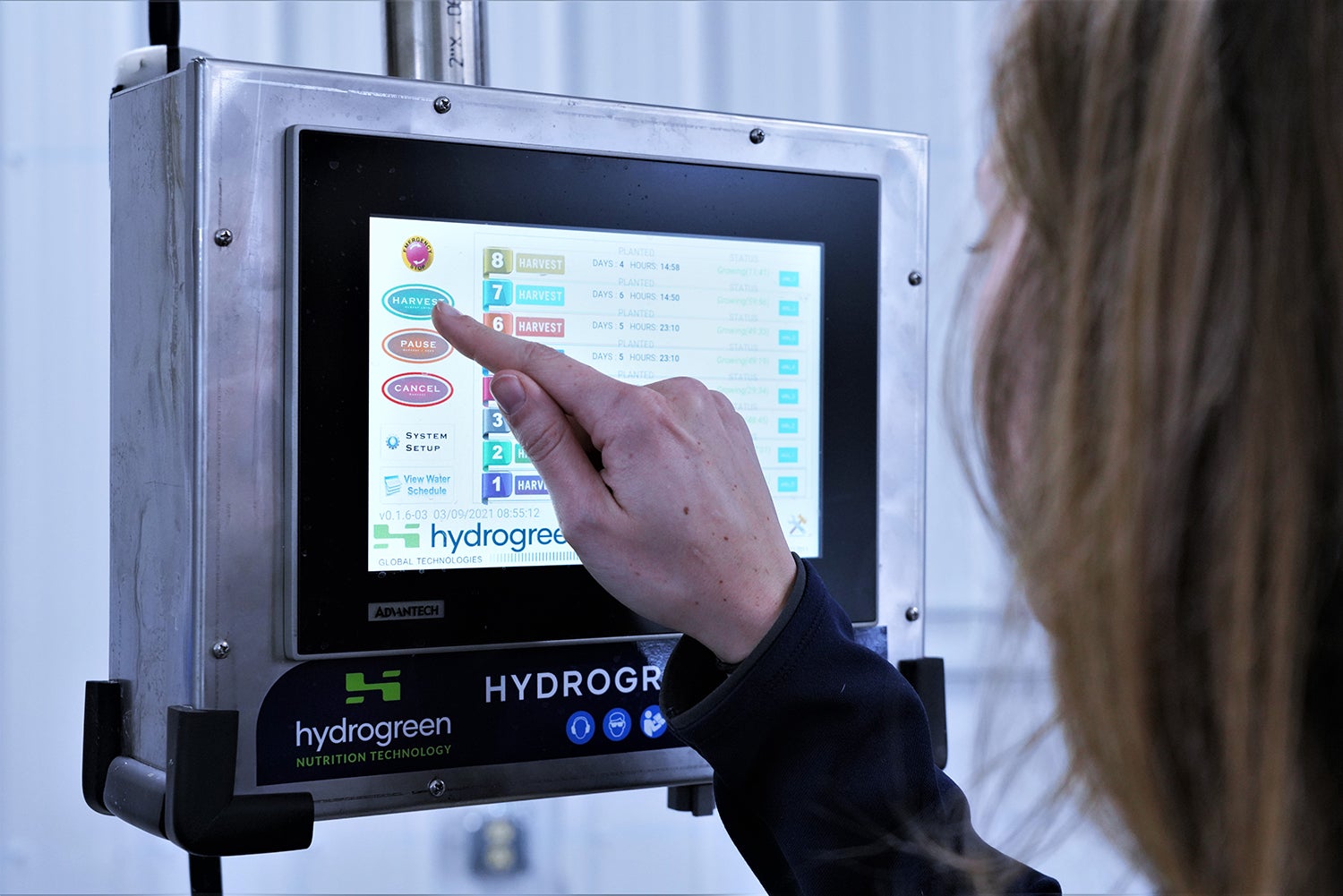 With one person able to control the entire growing process from a single digital screen, including seeding, watering, lighting and harvesting, HydroGreen says their setup can be easily customized to feed anywhere from 150 to over 1000 cows.

“One of the interesting parts of the technology is the scalability,” says Perrotin. “It can really grow with your needs, leaving a very small footprint and with very minimal resource needs.”

The company says a single 2,700-square-foot-building can replace up to 600 tillable acres while producing five tons of fodder each day.

Plus, they say, their fodder can contain up to 25% more protein than the original parent grain—with higher digestibility—due to the infant plant converting complex starches locked in the seed.

Perrotin says they are continuing to conduct research to learn more about the nutritional components of their fodder, especially as it pertains to milk production.

In addition to creating more nutrients without land, fodder feeds can also help reduce water usage, according to Perrotin, a big selling point for a lot of farmers. He says they could potentially replace up to 40% of their current corn or wheat silage.

Cutting back that much on traditional feed could have a significant impact from a water conservation standpoint, agrees Mesfin Mekonnen, assistant professor at the University of Alabama.

Still, some scientists say livestock farming can be beneficial for the soil, which is absent in hydroponic systems. 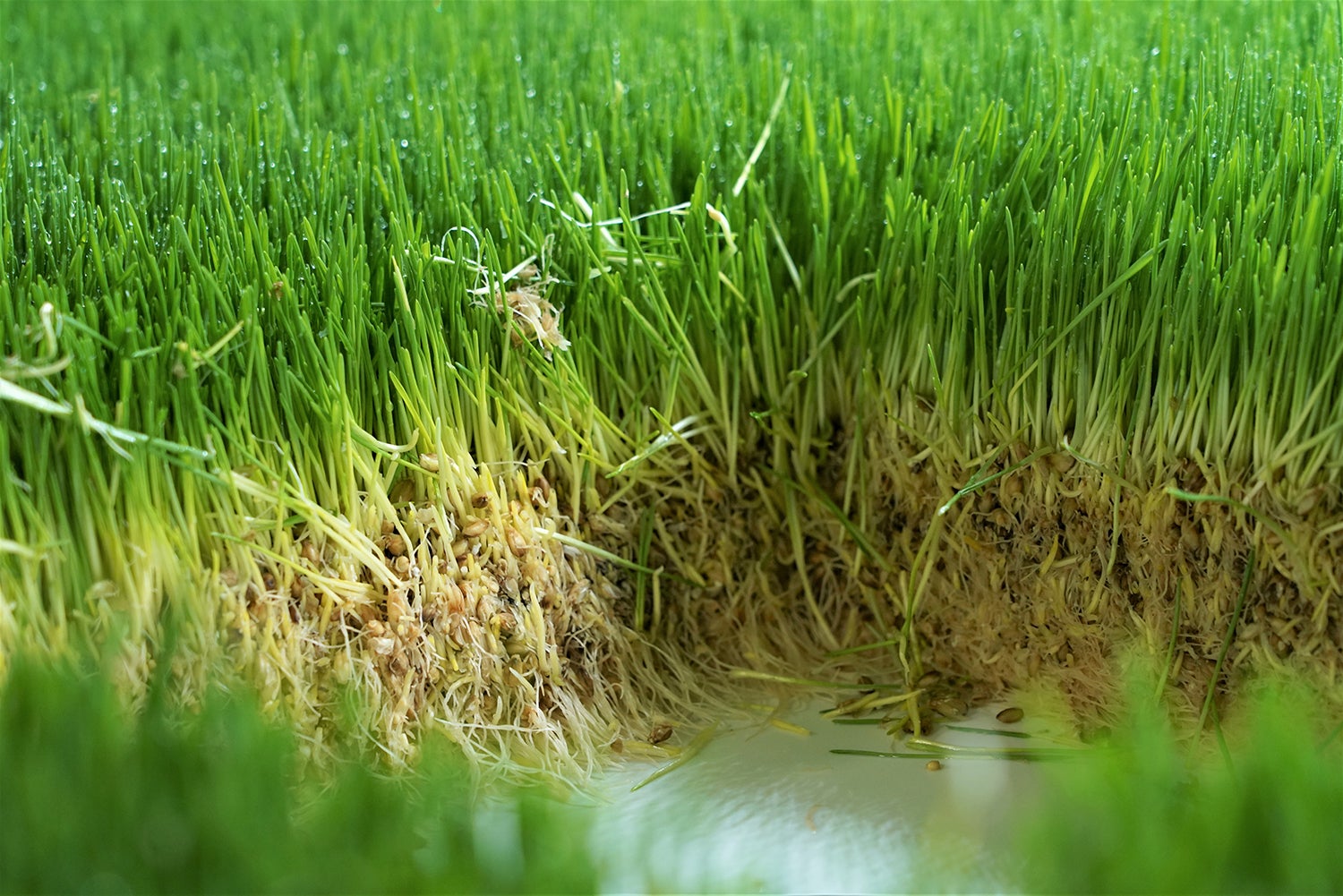 But what about soil?

Also, given soil’s potential to sequester carbon, explains Ermias Kebreab, associate dean at the University of California-Davis and director of the World Food Center, it’s an important part of the ecosystem.

“The manure (cows) produce would be returned back to the soil,” he says, “so there’s a good ecosystem balance going on there with the plants, the animals and the microbes in the soil as well.”

As for land conservation, Kebreab notes that farmland loss is not currently a key issue in the U.S. given that much of it took place about 100 years ago.

Part of the sustainability picture

While theirs is not a one-size-fits-all solution, Perrotin is confident their hydroponic fodder systems can be among the tools farmers use to boost their sustainability endeavors.

Similarly, he says they are currently investigating ways to use different water qualities and parameters in their system.

“We see HydroGreen,” he says, “as a very key link in that chain of circular farming where you could (eventually) reuse recycled water.”

For example, he says that farmers with access to adequate grasslands would be in a good position to recycle manure and sequester carbon by maintaining their soils.

“But not everybody will have access to that,” he adds. “If you don’t have that luxury of getting the cows in the field for the whole time…I think for that this technology would help.”