An international alliance representing 30% of the world’s milk supply has instigated the first steps toward an emissions-free global dairy sector.

The Food Systems Summit convened to “launch bold new actions” on the UN’s 17 sustainable development goals (SDGs), all of which rely to some degree on healthier, more sustainable and equitable food systems, according to the Food Summit website. SDG 13 calls for “urgent action to combat climate change and its impacts.”

“Pathways to Dairy Net Zero demonstrates the global dairy sector’s commitment to reducing GHG emissions while continuing to produce nutritious foods for six billion people and provide for the livelihoods of one billion people.”

The worldwide dairy sector, including milk production, processing and transportation, contributed approximately 3.4% of the world’s total of nearly 50,000 million tons of greenhouse gas emitted in 2015.

Though the global emission intensity of milk per liter has declined between 2005 and 2015, total emissions from dairy have increased by 18% because of worldwide increases in herd sizes, according to a report by the Food and Agriculture Organization (FAO) of the UN.

This initiative follows several other announcements from global dairy organizations pledging to reduce their carbon footprint over the last 12 months.

In 2020, the Innovation Center for U.S. Dairy pledged to reach carbon neutrality or better by 2050. And in June, Darigold announced similar plans for 2050. Their efforts will depend largely on the ability to scale various solutions.

The GRA, an international alliance of countries working to reduce greenhouse gases in food systems, is spearheading the research platform for Dairy Net Zero.

They are cataloging the many proven ways the dairy sector can mitigate greenhouse gases and analyzing which would make the most practical sense to implement, Montgomery tells the Daily Churn.

“We’re trying to consolidate a long list of possible things into a shorter list of more probable things.”

Next, he says, they will identify the different types of dairy systems and then effectively “combine the two together.”

The goal is to produce a slate of emissions-reductions models appropriate for adoption by the various types of worldwide dairy systems — whether it’s a pasture-based grazing system, a large-scale confinement system or smallholder, subsistence-type dairies with a handful of cows.

Some countries, like South Africa, have examples of a considerable breadth of dairy production systems all within their borders.

“The idea is, any dairy farm out there could say, I’m like that one,” Montgomery says. “That’s like what I do. Maybe not exactly the same, but more or less.”

According to GDP, research suggests that dairy emissions can be reduced by up to 40% in some systems simply by improving resource-use efficiency.  Montgomery agrees. 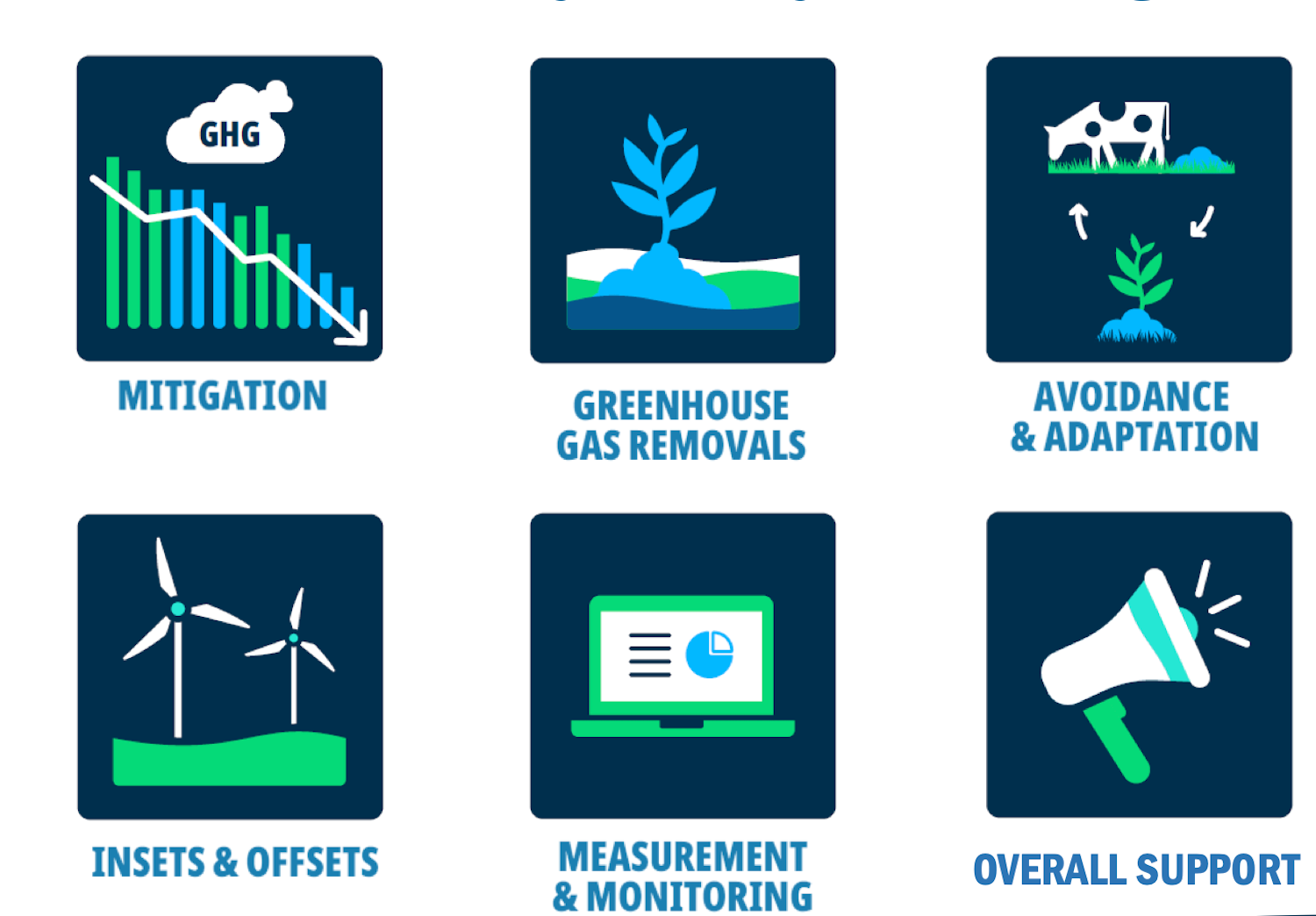 Better feeding techniques is one short-term opportunity that would quickly improve the productivity of many dairy systems in emerging nations, resulting in reduced emissions per unit, according to Montgomery.

While higher-quality feed will increase per-cow emissions, he adds, the greater milk production will more than offset it.

“Now you have other options on the table like, do you need so many cows?” Montgomery says, hypothetically.

Advanced dairy systems like those in the U.S. and the Netherlands have consistently shown a history of increased total milk production despite reductions in total dairy cows numbers, in part due to optimized feeding regimes and selecting for better genetics.

Between 1950 and 2000, for example, the total amount of dairy cows in the U.S. reduced by more than 50% while per cow milk production more than tripled, according to the United States Department of Agriculture (USDA).

Still, Montgomery recognizes that it will take a “significant breakthrough” in the understanding of how cows produce methane, in particular, to reach net-zero dairy emissions. 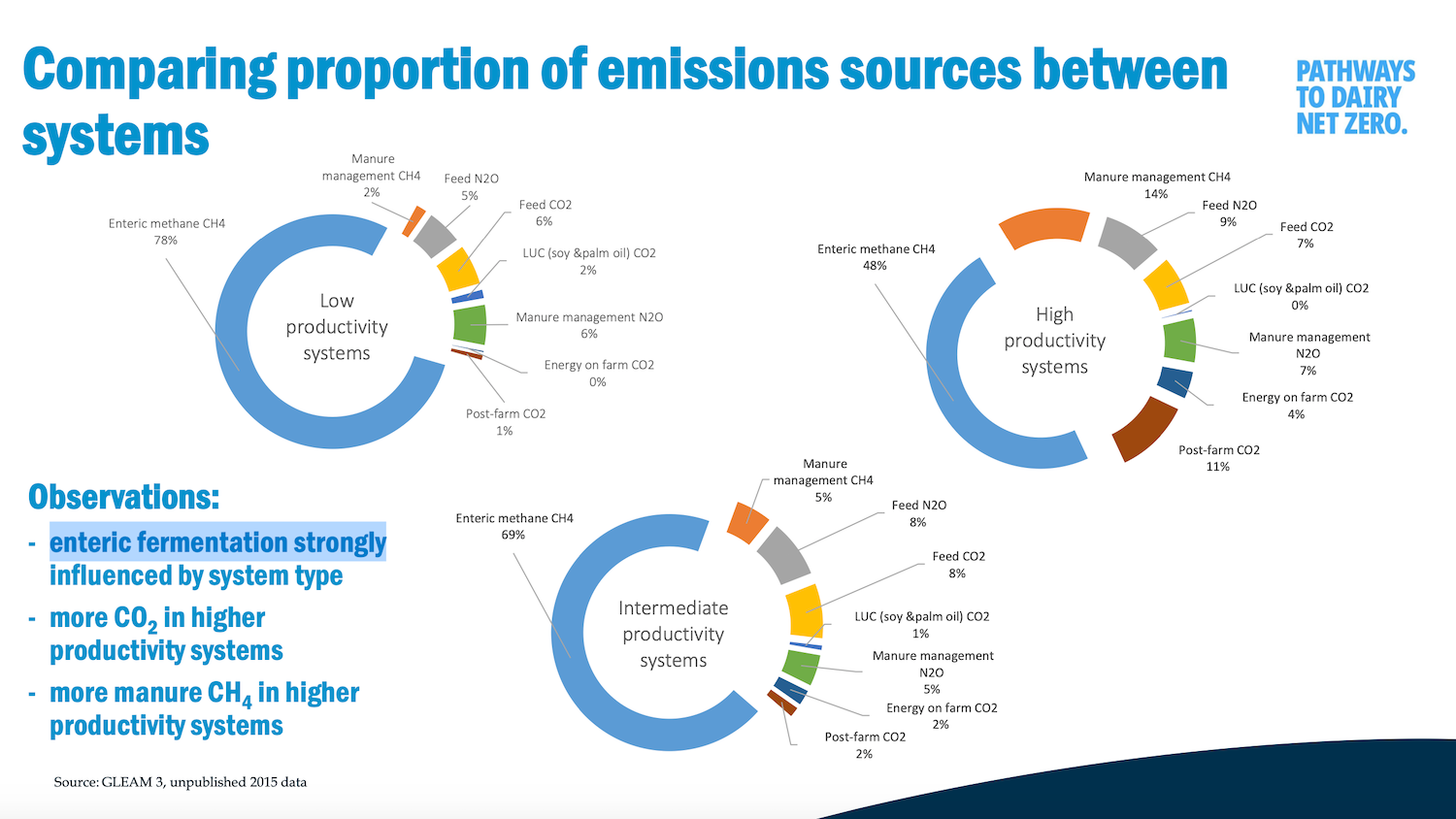 Cows and other ruminant animals naturally produce methane, a potent greenhouse gas, in their digestive process.

Methane is the dominant contribution to emissions from the dairy sector, according to the FAO, making up 58.5% of the total emissions produced by the global dairy system as of 2015.

Montgomery says while there are many new advances in lowering cow-emitted methane, such as methane-zapping masks and methane-reducing feed additives like red seaweed, those solutions may not be applicable for all dairy systems.

Plus, he says, even if all resource-efficiency measures such as husbandry, fertility, feed management, barn management and manure management were applied, the industry will “still need more” to reach net zero.

Scientists know only a few methane-producing organisms exist in the rumens of all ruminant animals, including sheep, goats, buffalo, and wild ruminants like deer. But they still don’t know why or how those organisms produce methane, according to Montgomery.

“We will need some other breakthrough in the understanding of rumen and how methane is produced that will really make a big impact,” he says, adding that he hopes the work of the initiative will highlight areas where further research investment is needed.