Henk Hanskamp’s unique CowToilet is designed to capture cow’s urine in a barn.

A farmer and entrepreneur, he founded Hanskamp AgroTech in The Netherlands to focus on dairy sector innovation — and, more recently, on ammonia emissions. First Hanskamp tried to potty-train cows, but that didn’t go very well. Then he discovered it is possible to get cows to urinate on command, leading to his unique design.

When a cow enters the feeding area of the barn, CowToilet automatically moves up and down, stimulating a nerve between the animal’s udder and vulva, causing the cow to reflexively urinate. Then a plastic device captures the urine, keeping it off the barn floor and separate from manure. This in turn helps prevent the formation of volatilized ammonia.

Ammonia is a primary contributing factor to smog-inducing atmospheric particulate matter, as well as acidifying soil and watersheds.

In the European Union, according to the 2019 Assessment Report on Ammonia conducted by the United Nations Economic Commission for Europe (PDF), livestock production is responsible for 90 percent of ammonia emissions.

Separately, neither urine nor feces produce a lot of ammonia. But when they mix, they volatize, releasing ammonia gases into the atmosphere. That’s why Hanskamp and his team were so interested in preventing ammonia volatilization in the first place.

“Instead of mopping the floor, you close the trap,” says Jochem Tolkamp, who provides dealer support for Hanskamp.

After completing several years of testing, Tolkamp expects the CowToilet to be available for purchase in the Netherlands next year — in 2021. Other European Union nations will follow shortly thereafter, but we are unlikely to see it in the U.S. before 2023. For Tolkamp, it can’t come soon enough.

“In the Netherlands we’re struggling with so many cows in such a small country,” he says, noting that total dairy farms have dropped due to increasing regulations and they expect that trend to continue in the short-term. “We’re at 16,000 farmers now and our regulations are tightening.”

Although it breaks down in the atmosphere within a few days and is not thought to be a significant contributor to greenhouse warming, ammonia reacts with combustion gases like nitric and sulfuric acid. This creates a fine particulate matter that contributes to smog, according to a 2018 Science Magazine review, and subsequent human respiratory problems. 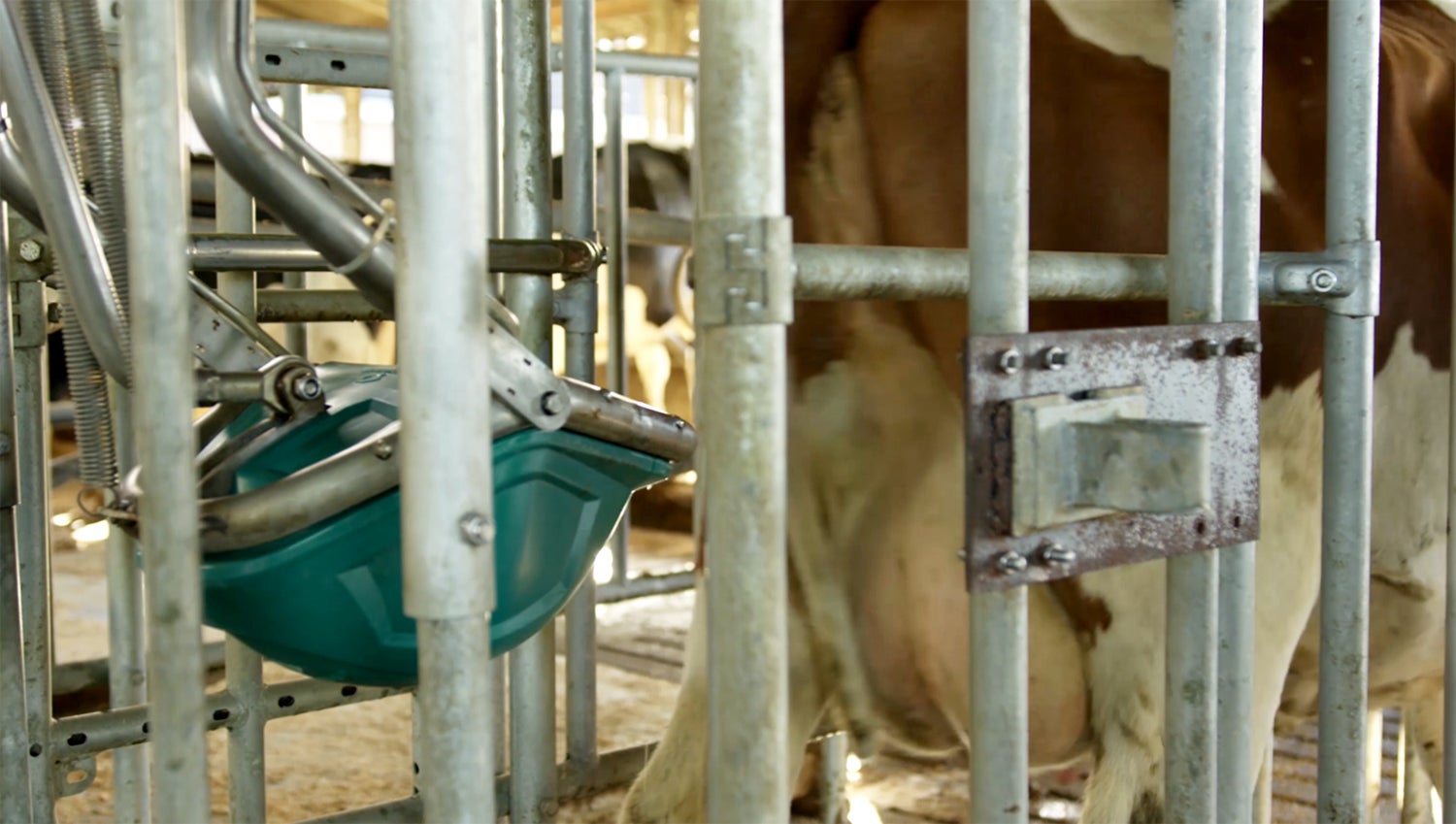 CowToilet is designed to gently stimulate a nerve that reflexively makes the cow urinate.

The Netherlands has taken particularly strong measures to mitigate ammonia emissions. After their court ruled a licensing system for ammonia-emitting activities was in breach of EU rules, government officials called for “halving the entire Dutch livestock population,” as reported by the 2020 Agricultural and Rural Convention. Local farmers reacted to that news by motoring their tractors to an October 2019 protest in front of The Hague.

In the U.S., most of the focus on ammonia has been at preventing it from potentially acidifying soil and damaging watersheds. And on limiting hazardous ammonia air conditions in enclosed farm production situations.

Solutions have included reducing the amount of urea produced by a cow through feeding regime changes or air scrubbers used in contained animal feeding systems.

But convincing cows to urinate into a toilet-like device and prevent the problem in the first place? Nobody has attempted that — at least not until the Hanskamp team put their thinking caps to the problem.

The idea was inspired by observing cattle outside, Tolkamp says. Cows don’t urinate and defecate at the same time, so the manure and urine in a large pasture don’t have a chance to mix.

“If the cows are outside,” he says, “we don’t have an ammonia problem.”

Ever tried potty-training a cow?

Tolkamp explained how the Hanskamp team first tried to “motivate and condition cows” to urinate in a specific spot, but everyone told them that potty training a cow isn’t possible. Eventually they had to admit defeat — but with a sense of humor.

“You know what, they were right,” goes the company joke, “you cannot do it.”

The “eureka moment” came when an intern who was raised on a dairy farm pointed out what most veterinarians already know: stimulating the nerve that makes the cow reflexively hunch her back and urinate.

From that barn-side inspiration, they conceived a design that would automatically reproduce the stimulation effect.

The CowToilet hangs behind the cow after she enters a feeding station. It can move both back and forth and side to side where it gently stimulates the nerve, like a painter with a rolling paintbrush, says Tolkamp. Eventually the cow urinates. But there were other design challenges.

Tolkamp says the nerve isn’t in the same spot for every cow and some cows are taller than others. Plus, they had to figure out how to convince the cow to visit the urination station in the first place.

CowToilet captures the urine, keeping it from hitting the barn floor and mixing with manure — and thereby preventing the formation of ammonia.

All in one design

The design team decided to take advantage of the walk-through feed station Hanskamp already sells with ear-tag reading technology. The cow enters the station for grain, the ear-tag reading device determines which cow it is, provides a grain ration and stimulates the urination reflex.

While Tolkamp admits the cows will still urinate elsewhere, as needed, the stations do capture a significant amount of her daily urine because the cows enjoy receiving a grain ration, he says. As a result, he adds, the cows become conditioned to use the stations predominantly.

Because the toilet only works in conjunction with conditioning the cows to the feeding station, Tolkamp says they are only selling it as a package with their feed-station technology.

But given everything that is included, he says it’s relatively affordable. The whole system — the station, ear-tag reading technology, precision feeding and the CowToilet — runs 700 to 1000 euros per station depending on the farm’s setup, needs and current technology. One toilet can serve 25 cows.

And to offset some of the upfront expense, the technology also creates a potential new income stream from the urine funneled to collection tanks.

The urea in urine is a common source of nitrogen, long used to encourage plant growth. By separating it into its pure, liquid form, it can be easily used for on-farm precision fertilization — without the hassle that comes with spreading a manure slurry.

Plus, says Tolkamp, instead of having to buy nitrogen to fertilize their crops, farmers can produce their own urea onsite.

Urine can also be turned into power. Hydrogen is more easily extracted from urine than water, leading scientists to explore the possibility of “pee-powered” cars.

With 1.5 million cows in the Netherlands producing 10 liters of urine a day, that is a potential 15 million liters of daily urine, Henskamp points out in a product video.

“We must be able to do something with that.”

The company’s next goal, says Henskamp, is to partner with start-ups that can utilize the collected urine.