Co-founder and chief strategy officer David Hunt says their technology allows farmers to see what is happening on their dairy “in high resolution in real time…without anyone needing to go into the barn.”

Based in California, Canada and Ireland, the company launched their first product in late January. Alus Nutrition focuses on “all things related to feed bunk management,” according to portfolio growth lead Tyler Bramble. This includes when feed is delivered to cows or when the cows have cleaned out the feed and need more.

AI in the barn

Cainthus’ smart cameras monitor cows, while their software interprets what the cameras see. If the software picks up any changes either in cow behavior or in the cows’ environment, it then sends a notification to the farmer’s smartphone.

Hunt notes that Cainthus does not use facial recognition technology, but rather pixel pattern recognition. The two are, in his words, “technically extremely different.” While it is possible to apply facial recognition to cows, he says the company has concluded it doesn’t make financial sense to do so.

Instead, the software Cainthus uses analyzes pixels in the images. Hunt says it is programmed to recognize that a given pixel pattern belongs to a cow or to feed.

“If there is no pixel pattern that we have labeled as feed available, then there’s no food for the pixel patterns we call a cow and we need to send an alert to the farmer,” says Hunt. For busy farmers who simply can’t be everywhere at once, the technology offers promise.

Jane Cummings, vice president of computer vision and data science at Cainthus, compares their technology to “a superhuman who would stand watch in a pen 24 hours a day without sleeping and who had an intimate understanding of dairy cows.”

“Once we have AI in place monitoring the signals for good health, comfort, feed efficiency, reproduction, etc. continuously over time,” she says, “how can we analyze that wealth of data to find trends and opportunities for increasingly better management?”

To answer this question, the company partnered with several dairies to test their technology. Bramble says Cainthus worked with around 15 dairies globally, particularly in Europe and Canada. In the last year or so, they’ve mostly focused on four dairies in California.

One central California dairy, according to Cainthus, has already optimized their operations with Alus Nutrition.

Once a day, late at night, one of the dairy’s employees was supposed to climb aboard a tractor to clean out leftover feed. Thanks to the AI technology, the dairy realized the employee was performing their task 30 minutes early. Meanwhile, the person delivering feed was right on time, opening up a window in the middle of the night where the cows lacked access to feed. 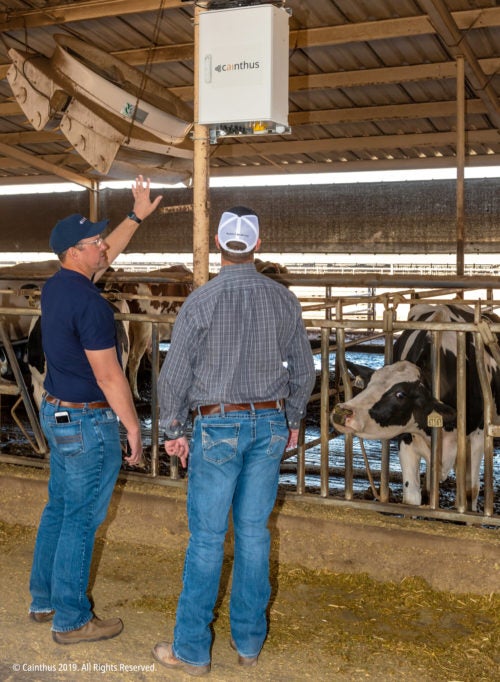 “[The dairy] increased communication between the person cleaning out the feed and the person delivering it,” says Bramble, adding that their products can serve as eyes for dairies operating with limited resources.

“There’s less trained personnel, the labor is expensive, so there are more and more hours out of the day where there aren’t eyes on these cows,” he says. “If we can help fill that gap, that’s a good thing.”

Hunt points to another unexpected side benefit of Cainthus’ technology: given that so many people today are concerned with what happens on a farm, Hunt says their system inadvertently reveals the care farmers provide for their animals.

“[Consumers] don’t seem to accept that a lot of farmers are farmers because they love working with their animals, and cow comfort is one of the biggest trends in the industry,” he says.

“So for us as a company to be able to provide that third party validation to an increasingly skeptical consumer that all of these animals are treated well, and cow comfort is a major focus for the farmer on a day-to-day basis, we think that’s a massive fringe benefit we can offer.”

Hunt, who grew up on a hobby farm, shares his larger vision of using digital tools to help farms operate symbiotically with their environment.

“For me, the digital ag revolution is all about going from farming with limited understanding to being able to farm with a much fuller understanding of the variables and complexity that impacts our agricultural productivity,” he says.

Until now, adds Hunt, agriculture has been based on human observation and heuristics, whereas the digital revolution makes it possible to have real-time, empirically accurate measurements of everything that goes on at a farm.

“Instead of treating a 500-acre field as a single biome where we treat every inch of that field the same,” he says, “we’re going to be able to start farming in more environmentally symbiotic and sympathetic fashions by understanding exactly what is suitable for every meter square at any given moment in time.”

The company plans to roll out Alus Nutrition in California for six to eight months, but they’re not stopping there.

Bramble says the company hopes to launch new animal behavior and health metrics as well. With these and other plans in the pipeline, he is convinced “this is the future of how dairies will be managed.”