A 35-year-old food scientist from Portland, Ore. is distilling a specialty liquor out of whey — a ubiquitous byproduct of cheese-making.

Emily Darchuk’s Wheyward Spirit is made by fermenting and distilling sweet whey, a waste product left over from commercial cheese making. While some whey generated in cheese-making is used for protein powders and other products, a lot of it is dumped.

Less than half of the over 100 billion pounds of whey generated annually in the U.S. – mostly sweet whey from cheese, rather than acid whey derived from yogurt – is fully utilized, according to the Department of Agriculture.

Wheyward Spirit, according to the creators, is a clear liquor that compares to vodka. They call it “complex and sippable with a natural creamy smoothness.” But don’t take their word for it.

The whey-based liquor was among the 2021 Good Food Awards winners for spirits and in 2020, Travel + Leisure listed it as one of the fall’s “best spirits” to try. It also earned a coveted mention in the New York Times.

Given that 30 percent of all food in the U.S. is wasted, finding a use for an unused byproduct like whey helps conserve resources, says Leah Graham, marketing director of the Upcycled Food Association.

“There’s already a lot of time and energy and resources that went into making something like whey,” Graham says. “To just have it thrown away is a complete misuse.” Darchuk agrees.

After obtaining her bachelor’s degree in food science and nutrition from the University of Illinois at Urbana-Champaign in 2009, Wheyward Spirit’s founder and CEO took a job as a food scientist for Horizon Organic.

There she realized how billions of pounds of whey generated annually at dairy processing plants across the U.S. overburdens local municipalities’ waste treatment centers.

“I’ve seen areas where they’re limited to the number of days that they can produce (cheese) a year,” Darchuk tells The Daily Churn, “because they’re having to, essentially, dump (the whey) down the drain.”

With a desire to continue her education in dairy, Darchuk attended Oregon State University in 2013 to obtain her master’s degree in food science and technology. There she focused her research on milk hauling.

Learning how milk moves from farm to dairy processing plants and eventually reaches nearby communities helped Darchuk understand “where things come from, why they are, how they are and (then) finding those opportunities to create something.”

With that insight, she developed Wheyward’s “farm-to-flask” concept using local processors as the source for her key ingredient. This eventually led in 2018 to her establishing Wheyward Spirit.

Packed with protein, water, sugar and minerals, whey is what Darchuk considers “liquid gold.” But she says it was challenging to find a process that maximizes its potential — until she turned to distillation.

“I brought a lot of my background in product development and fermentation — along with a healthy dose of curiosity and creativity — into my approach with distillation,” she told  Sip Magazine.

Here’s how it works, according to details outlined on Wheyward Spirit’s company website: 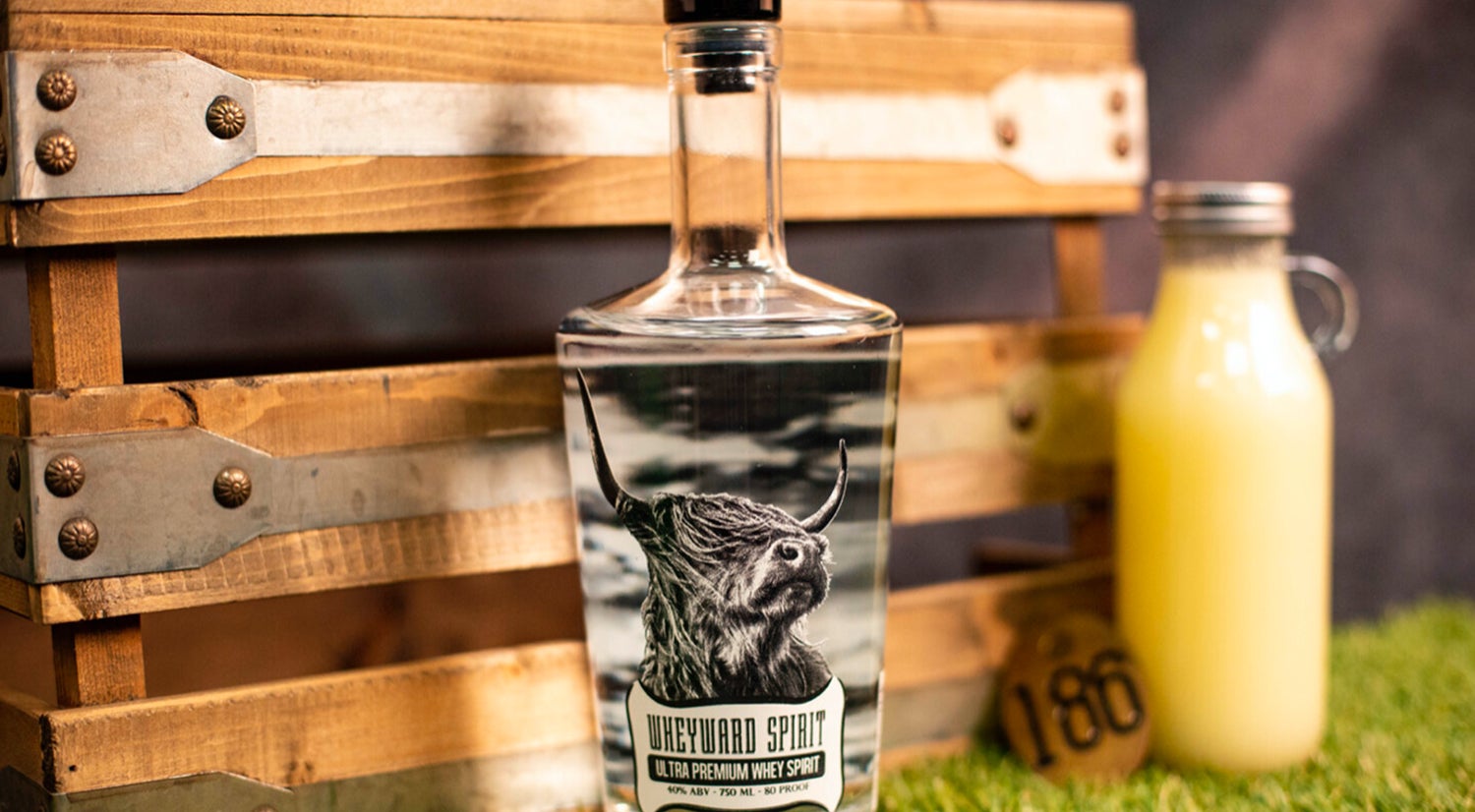 It starts with yeast converting whey sugars to ethanol. The resulting “whey beer” is then distilled (boiled into vapor and then condensed back into liquid using a separate container), the flavor concentrated and refined by strategic cuts made in the process. Finally, the spirit is filtered, proofed and bottled.

Darchuk attended the 15-week Cascadia CleanTeach Accelerator program in 2018, hosted by CleanTech Alliance in Seattle and Vertue Lab in Portland. The latter’s portfolio director, Vanessa Margolis, says she was impressed by Darchuk’s dedication to the craft and her resulting product.

“Creating a new type of spirit and entering a highly competitive industry is challenging,” she tells the Daily Churn, describing the beverage as something they’d never seen before in specialty spirits — and one that consumers can use to express their values. “Consumers can now enjoy a cocktail knowing they are also helping reduce food waste.”

It took three years of production, but Darchuk finally rolled out her finished product for distribution in November 2020.

Distilling whey into liquor, according to Darchuk, is exceptionally “green.”

This is especially true when compared to traditional distilleries that create 12 times more wastewater than alcohol, according to a 2012 report on the “Carbon Footprint of Spirits.” That equates to about 2 to 4 gallons for every quarter gallon of alcohol.

But distilling whey results in water savings, she says, simply because you’re presenting something already in liquid versus getting corn and then having to add liquid before breaking it down.

Darchuk believes every bottle they sell inspires people to connect to how food is made, creating a more “versatile, sippable experience” that not only tastes different, but also makes a difference.

Today, it is possible to purchase Wheyward Spirit online. The company ships to 30 states.