A simple new technique that coats seeds with CO2-capturing microbes could be one more tool dairy farmers use to sequester carbon.

The company told Fast Company that — deployed globally — the coated seeds could potentially sequester approximately 8.5 billion gigatons of carbon annually, or a quarter of the world’s total carbon emissions. While they are at least two years from a commercial launch, there are already several other tools dairy farmers can use to draw down atmospheric carbon.

The Food and Agricultural Organization of the United Nations (FAO) estimates that global dairy production in 2015 contributed 1.7 million tons of greenhouse gases to the atmosphere. In the U.S., according to the Environmental Protection Agency (EPA), dairies contribute around 1.3 percent of total emissions.

Yet there are “many ways in which the dairy carbon footprint can be reduced,” Rattan Lal, Ph.D. and the 2020 winner of the World Food Prize for his work in climate-resilient agriculture, told the Daily Churn.

Part of the way dairies offset their carbon footprint, he adds, is by employing a variety of methods to sequester carbon. Here are at least five.

1. Cover crops for forage and pasture

For dairy farmers like Austin Allred in Royal City, Wash., cover crops not only promote good soil health, but can also be used as winter pasture —and a source of forage materials for their cows.

Double-cropping, according to the University of Massachusetts Amherst Center for Agriculture Food and Environment, can yield up to four additional tons of forage per acre.

Allred, who is both a dairy and beef farmer, plants triticale—a fast-growing winter forage crop that his beef cattle graze throughout winter. And in Spring, there’s enough left over to cut and feed to his dairy cows.

It’s a “great system,” he says, adding that his best triticale silage yields come from the same fields he grazed all winter. But it’s not just what farmers plant that matters, it’s also how they farm it.

Many dairy farmers, like Allred and Dirk Young of Twin Birch Dairy in Skaneateles, New York, have adopted conservation tillage techniques for growing their crops.

Tillage—the act of churning up the soil in preparation for planting—destroys soil structure, releasing carbon from the soil, according to the Natural Resources and Conservation Service (NRCS).

On the other hand, not tilling at all or cultivating narrow pathways into previous crops to plant new seeds, was shown, in a review of soil carbon literature published in the Environmental Evidence Journal, to promote higher soil organic carbon in topsoil.

For Young, a 2020 U.S. Dairy Sustainability Award winner, the latter combined with cover cropping helps protect what he considers his most valuable resource.

“We can replace barns and equipment,” he told Life in the Finger Lakes Magazine, “but not our soil.”

And then there’s grazing. 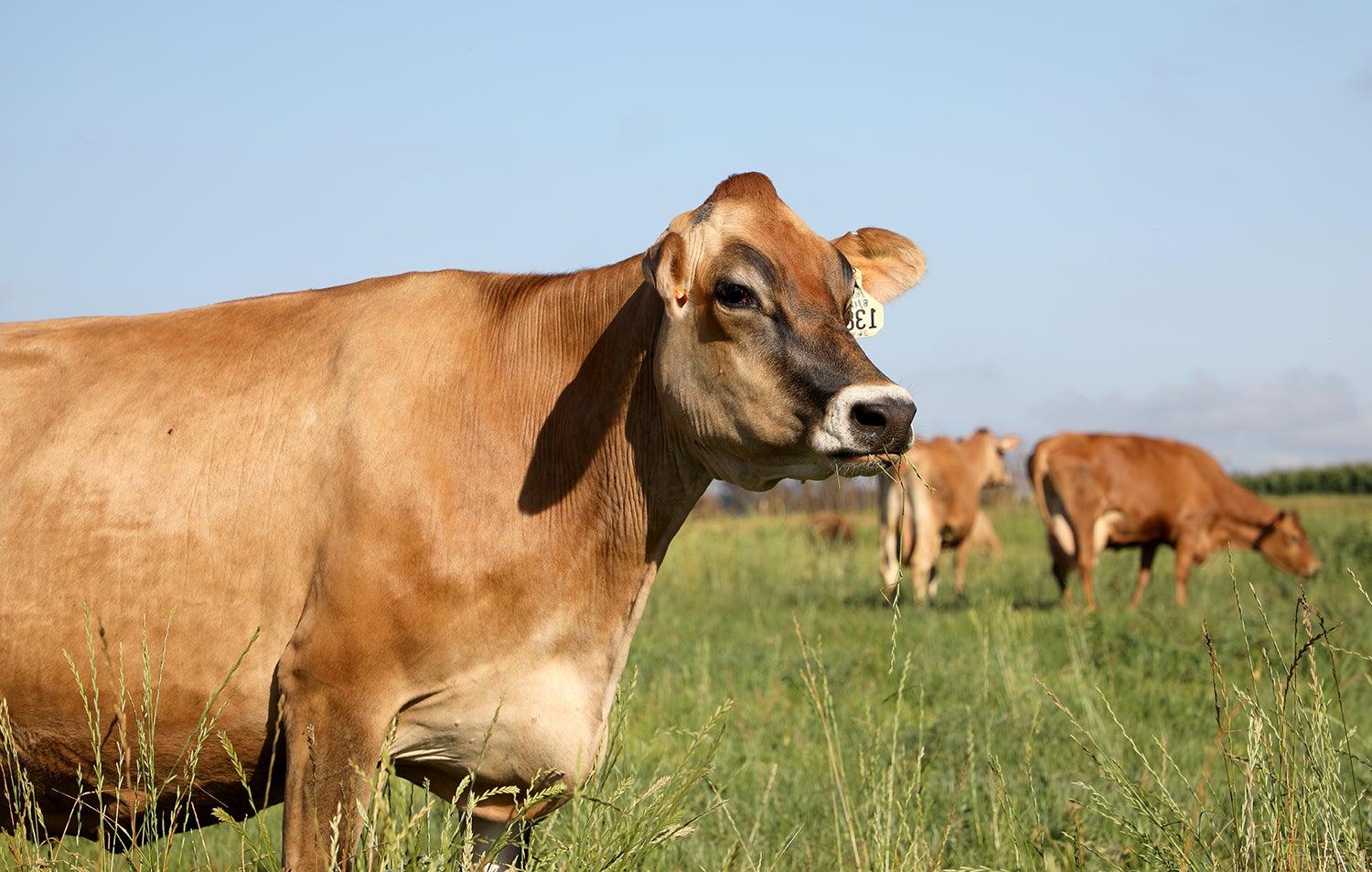 It’s not uncommon for dairy farmers to graze some or all of their cattle on pasture—some do so more intensively than others.

Employing a technique often called “regenerative grazing,” some dairy and beef farmers use portable fencing to frequently shift their cattle through paddocks, allowing cows to have just “one bite” before moving to a new pasture.

The cows eat the tops of the grass, trample down the leafy mass and leave feces behind. This manure feeds microorganisms in the soil, boosting its ability to sequester more atmospheric carbon.

How much carbon this practice can sequester is a hotly debated topic. But research published in the Proceedings of the National Academy of Sciences (PNAS) suggests it could be as much as 322 billion to one trillion tons a year.

And in the areas not appropriate for grazing? Dairy farmers take measures that not only are highly effective at sequestering carbon, but also improve local water quality. 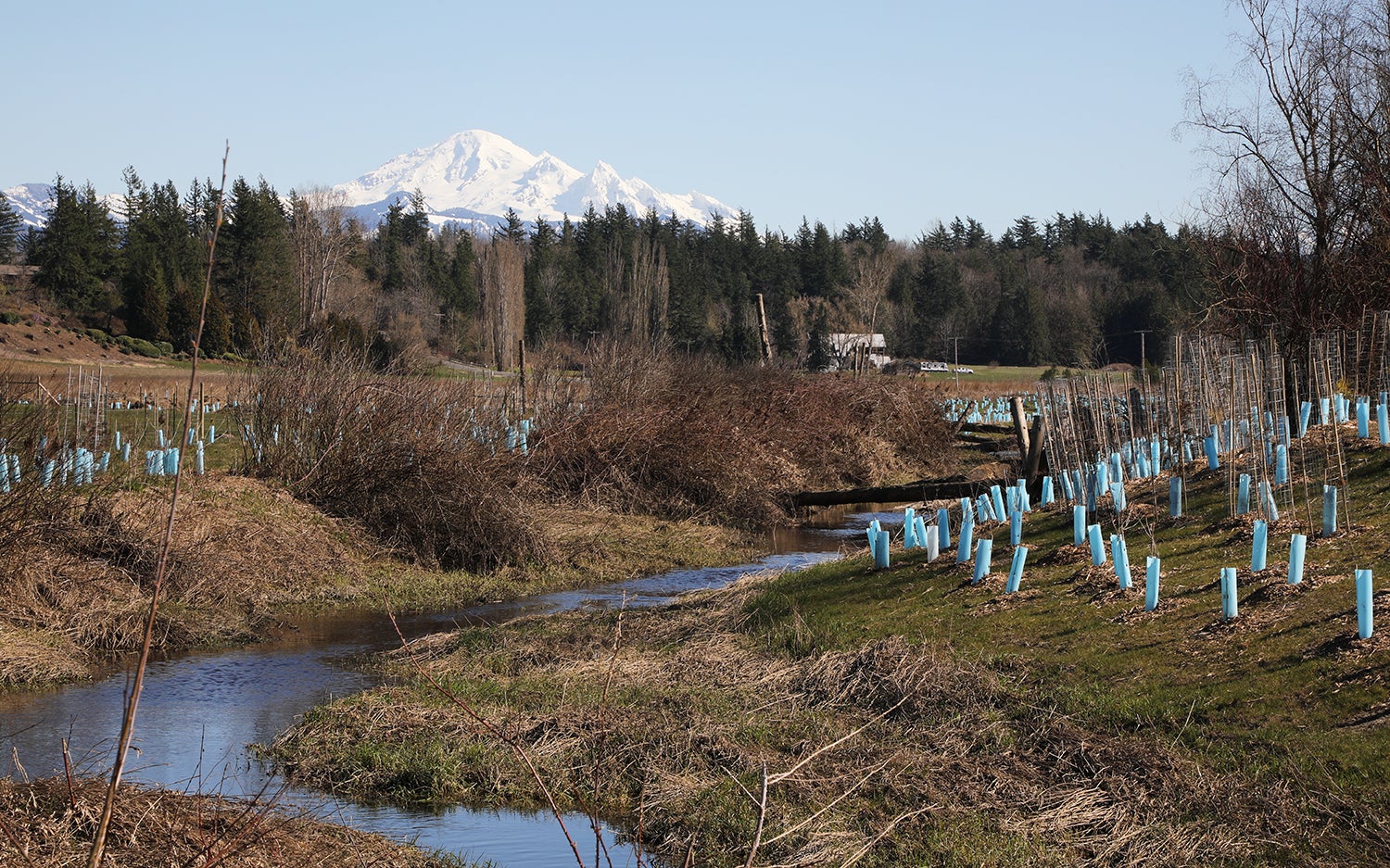 Any time trees are planted, it’s a long-term win for drawing CO2 out of our atmosphere. According to the Pennsylvania-based Keystone 10 Million Trees Partnership, an acre of forest draws down twice the amount of CO2 produced via an average car’s mileage.

For dairy farmers, riparian buffers — a strip of land planted into trees and shrubs between pasture-lands and streams or watersheds — are a win-win for carbon sequestration and improving sensitive watersheds.

Riparian buffers are also effective at storing carbon because trees thrive in moist conditions. Scientists at the University of Guelph found that rehabilitated riparian buffers have the highest potential for carbon sequestration, even more than natural forest systems.

In New Zealand, DairyNZ-NIWA hopes to empower dairy farmers to plant “productive riparian buffers” that can be harvested for additional income streams.

The three-year project supported by the Sustainable Farming Fund could incorporate specialized honey production, plants harvested for use in medical or fragrance industries or fruit and nut crops — among other ideas.

While not all dairy farmers can create riparian buffers, there is one thing almost all can do with one of their most abundant resources — improve soil and sequester carbon with judicious manure management. 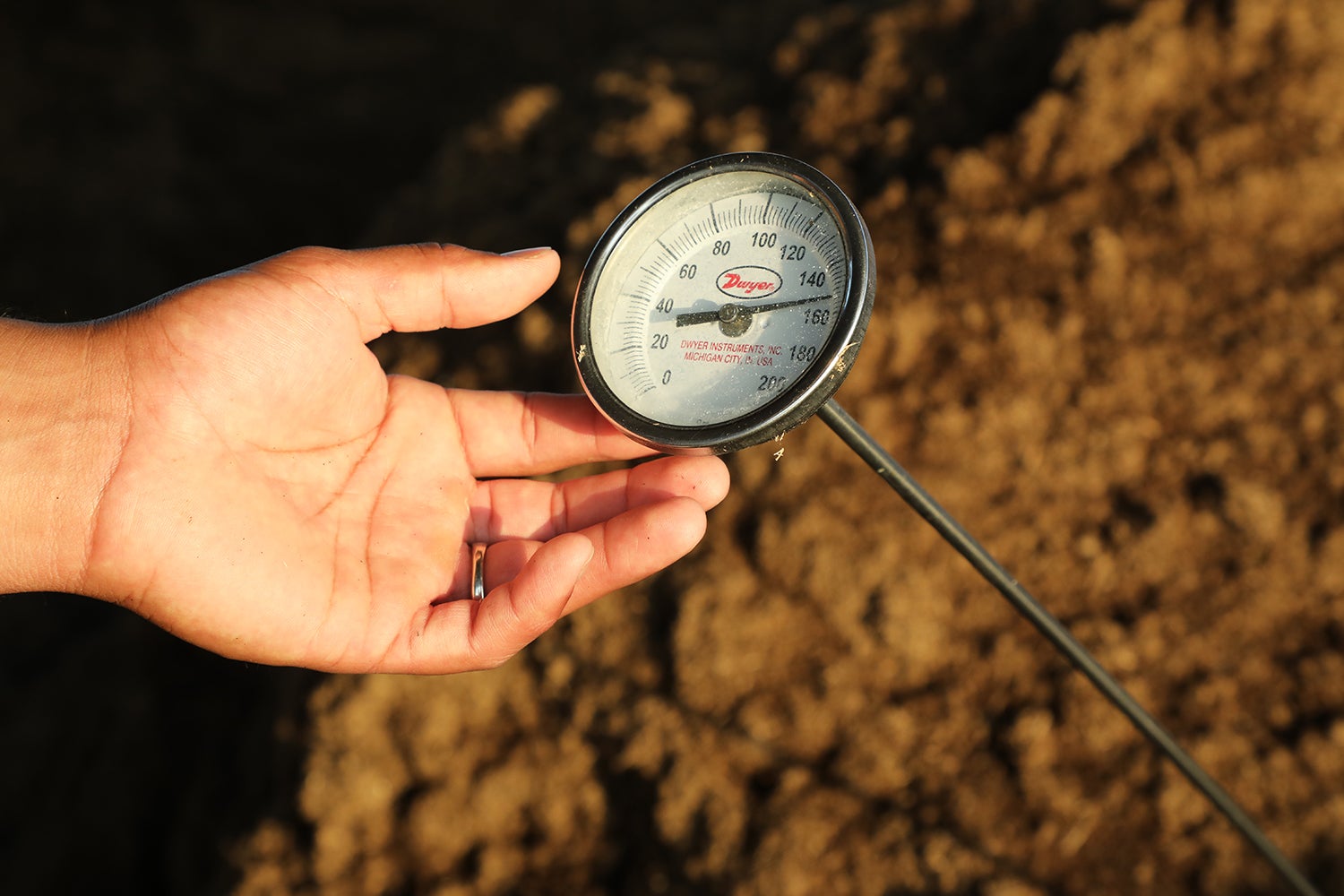 A single dairy cow produces up to 80 pounds of manure a day. Too much of it and improper storage can lead to nutrient leaching, watershed pollution and release greenhouse gases into the atmosphere.

Manure application is an important tool in sequestering carbon in drylands, the FAO notes, helping to promote organic matter in the soil. Studies show that over five years, soil applied with manure had 1.18 tonnes per hectare more carbon than soil that received plant residue alone.

Even better yet, compost made from cow manure is a highly effective way to sequester carbon while neutralizing the potential problems of nitrate run-off and methane emissions, “storing it in the soil instead of releasing it in the air,” according to the UCLA Institute of Environment and Sustainability.

Dairies don’t just sequester carbon, they also help to mitigate the formation of greenhouse gases associated with food waste in landfills — about 306 million pounds every day.
While these are basic strategies many dairies already employ, we are seeing an explosion of innovations like the coated seeds, seaweed and worm-powered water treatment that can further mitigate dairy’s carbon contribution.

For Allred, given their help in sequestering carbon and providing nutritious meat and dairy products, it’s clear that for many pressing environmental challenges, “cows are the answer, not the problem.”

All images via The Daily Churn

Yes cows are the biggest recyclers on the Planet taking human food waste and turning it into food we can eat and also producing fertiliser. Treating your slurry and manure will lead to reduction in GHG and also reduce the farms dependancy on bought in fertiliser which has further benefits as Nitrogen fertiliser manufacture is highly inefficient using 1.1 tonnes of fossile fuel to produce and releasing the equivalent of 7 tonnes of co2 per tonne produced with some producers in the UK reducing this to 3.5 tonnes.However that is in the manufacture alone and the use is in the… Read more »

What an intriguing notion, that in simply doing what farmers have always done — plant seeds, harvest crops, and feed animals — but with the reimagined resource of carbon-saving seeds, there could be such a huge impact on our atmospheric environment. I appreciate your clarity in distilling the notion of carbon sequestration in the livestock industry down to five simple — and for the most part traditional — farming practices, as we wait for upcoming innovations to become available. From our perspective (livestock industry members), it seems obvious; the challenge, of course, is to spread this knowledge among those who… Read more »