Nobody wants another snowmageddon — least of all dairies. Earlier this year, record snowfall and gale force winds devastated farms in the Yakima Valley region of Washington State, catching whole communities off guard. Dairy farmers lost 1,800 dairy cows in one February storm. Governor Inslee declared a state of emergency, and local news quoted farmers who had been up for 36 hours trying to keep cows warm and milk moving. Jason Sheehan of J&K Dairy told The Sunnyside Sun that for the first time in 17 years, his central Washington dairy had to dump milk.

Now, as we all button up harvest and colder temperatures make a comeback, I wondered what farmers across the Pacific Northwest are doing to prevent a repeat of this scenario. Our dairy in northeast Washington is accustomed to seeing up to 45 inches of snow in a year, so we have longstanding procedures for serious winters. Free stall barns defend cows against cold and wind, while thick curtains on the end ensure proper ventilation, keeping the air fresh. We also add more forage to the cows’ feed ration, because they need extra energy to stay healthy. Meanwhile, our pickups stand ready to plow snow and the tractors stay primed to pull neighbors out of ditches.

And then, of course, we’re always on call in case the milk truck gets stuck.

Curious about coping strategies on other farms, I talked to four farmers across Washington, Idaho, Montana and Oregon. Kolby Secrist in Central Washington says he focuses on cattle nutrition, as well as employee health and safety. Jason Staehely in Western Oregon pays special attention to cow health and comfort. Brooke Teunissen, a young Idaho producer, underlines the importance of watching water and equipment temperatures, while Shane Leep in Montana deals with all this and snow runoff.

After Washington State was pummeled with record snow in early 2019, Ashley Hanson set out to understand how farmers are prepping for the upcoming winter

With their 800-cow dairy located near Moses Lake, Secrist says the storms that wiped out Washington State last year were too close for comfort. He credits their being spared the worst  to weather apps and other technology they monitor with their phones. “When those storms come in, they pack a pretty good punch,” he says. “They always have a really strong north wind.”

The 33-year-old dairy manager says they keep large straw bales ready to stack up as barriers around the open-sided free stall barns. In the mild to hot climate of Warden, this kind of housing is excellent for ventilation and cow health — until storms come in. Stacks of straw are already piling up on their farm. On Cole Dairy, winter preparation begins long before the storm hits. Just like people, Secrist’s cows get a little more comfort food when temperatures start to drop.

Cows are always fed a total mixed ration (TMR) formulated by Secrist and his cattle nutritionist. In the winter, cows get a bit more energy-providing forages and corn. Secrist says he is constantly monitoring herd health – down to nitty gritty details like hair growth. His dairy also prioritizes employee warmth and well-being by ensuring everyone has coveralls and opportunities to stay warm while working in the parlor, barns or tractor cabs. But their best defense against cold temperatures, fierce wind and dense fog, according to Secrist? “Getting work done.”

Whether it’s feeding calves or turning calf hutches to face away from the bitter north wind, he says everything gets done as a team. “It’s not your job or my job. It’s our job,” he adds. “The colder it gets, the more work there is to do.”

Meanwhile, rain in Western Oregon also makes it hard for farmers to keep their dairies clean and dry — according to Jason Staehely. 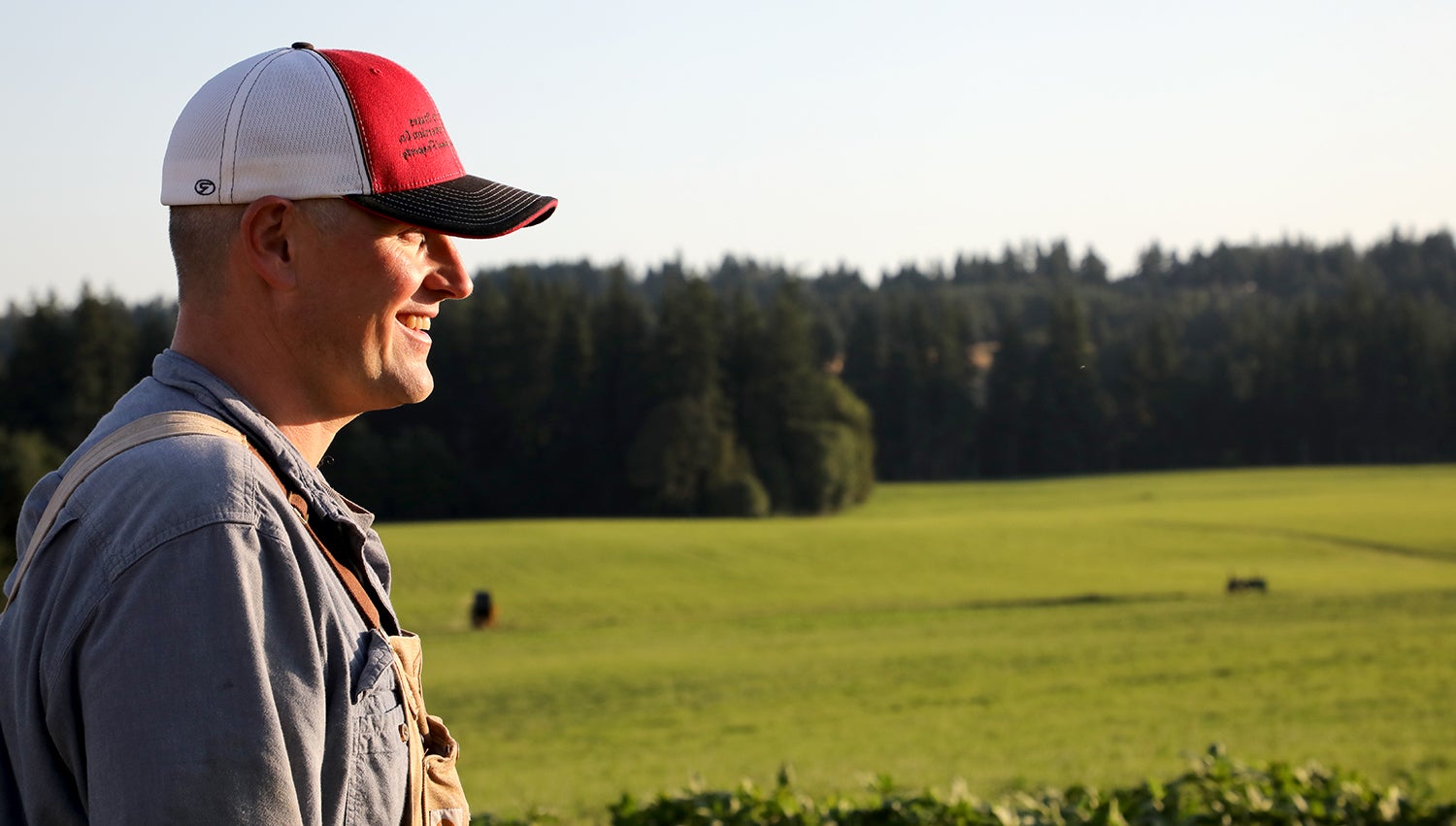 Jason Staehely farms with his family in Western Oregon

Keeping the Holsteins warm and healthy is his family’s first priority, says 39-year-old Jason Staehely. He farms with his father, Paul and cousin, Andy Millison.

The freestall barns on their 350-cow organic farm have metal sides so the herd is well-protected from the elements. They also make sure to purchase plenty of straw, the bedding of choice for most farmers in cold areas. Just as humans are more prone to getting sick in cold, wet weather, cows of all ages are also more at risk of contracting diseases like pneumonia. , Staehely says they work hard to prevent illnesses by creating a clean, dry environment for cows. Calves require even more attention.

Echoing other producers, Staehely believes hutches are the way to optimize calf health. Bedded with fresh straw, these calf homes help capture body heat while providing sufficient air-exchanges. And if it gets really cold? The Oregon City farmers dress their calves in special blankets. Staehely breaks it down into three simple steps: “Keep them out of the elements, give them fresh food and water and good, dry bedding,” he says. “You just prioritize cow comfort”

This level of herd care is hard to achieve, though, without the use of water and machinery – both of which are finicky in the cold.

Idaho has brutal winters, which requires farmers to pay special attention to their equipment

Taking good care of water pipes and machinery is a big deal for Teunissen Dairy. They’re located just northeast of Boise, where ice and freezing rain are common in winter. A recent California Polytechnic University graduate and the youngest Teunissen daughter, Brooke is back on the farm, helping her family get ready for the cold. Winters in New Plymouth range from mild to the worst you can imagine, says the 23-year-old dairy science major. There’s a lot of minor details to consider, she says, especially when it comes to water and equipment. For instance, they do regular maintenance checks on drinking trough heaters to make sure the water temperature is just right.

“You learn more every year on how to prepare better,” Teunissen says. For example, her family knows to either repair or purchase plenty of space heaters before winter hits, for both employees and cows. It’s also important to keep plenty of antifreeze, she says, check batteries and test pressure valves. “The last thing you want on a 20-degree morning is a feed tractor that won’t start.”

On their Idaho dairy, they bury their pipes to prevent freezing, so that there’s always water available for the cows and cleaning duties. “Seasons change, but our animals here are comfortable, dry and clean,” she adds. “Those are our ultimate goals here.”

Each dairy farmer I spoke with repeats the same mantra as Teunissen. In eastern Montana, Leep underscores the importance of winter preparation for constant levels of milk production. 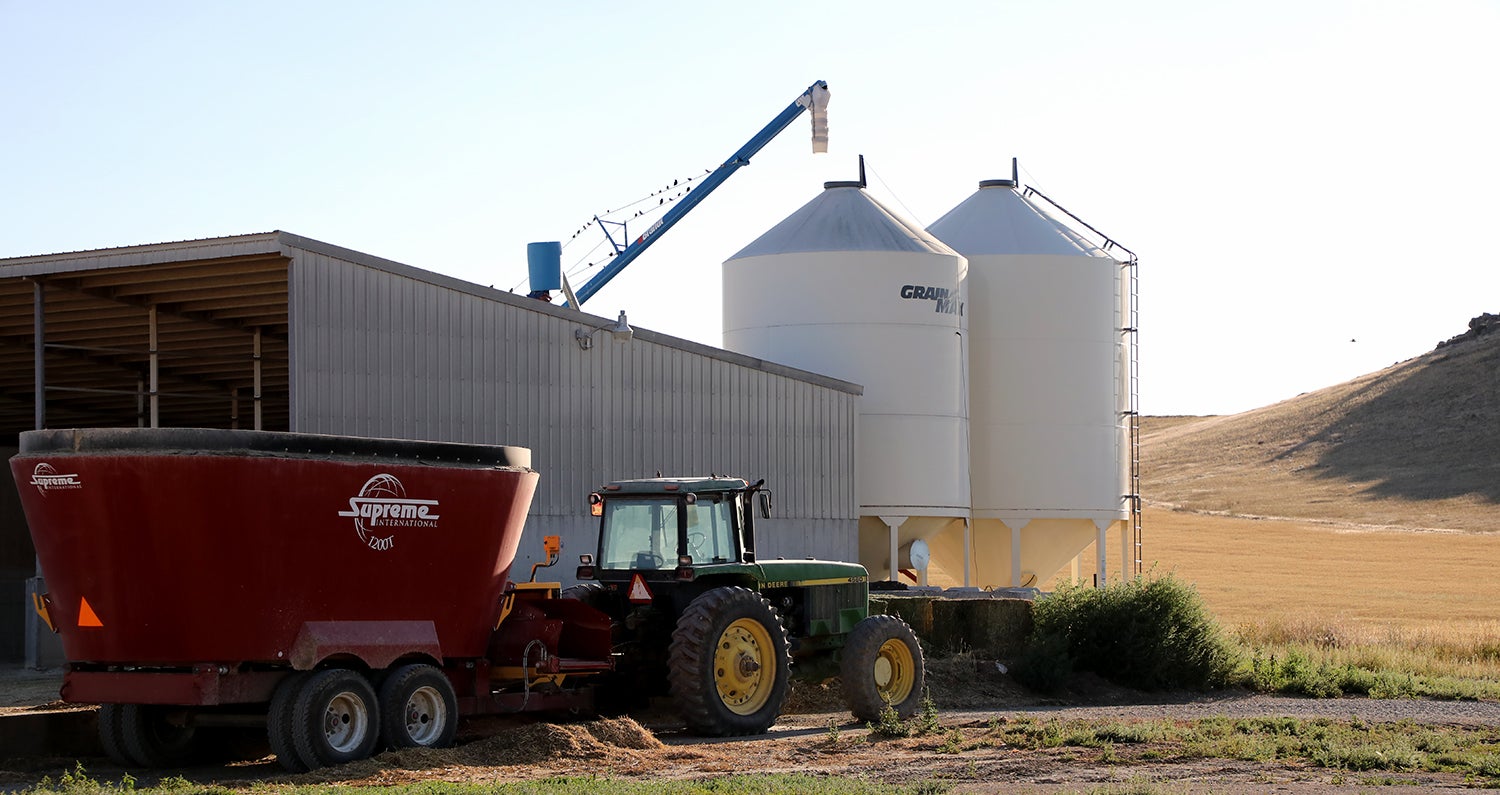 With six inches of snow already covering the ground that is still holding unharvested alfalfa and corn, they better be prepared for winter, Shane says of the 800-cow dairy he runs in Montana with his father and brother, Jerry and Jeremy Leep.

Given average snowfall in the 50-inch range, they too have strategies for managing moisture. For starters, they created a system that drains snowmelt into the same wastewater area used to store other effluent, preventing runoff into local waterways. They also built tall wooden and concrete structures to act as wind breaks for the cattle, and use straw bales as barriers when necessary. Every element of the farm is designed to keep cows warm and productive, says Leep.

Their newborn calves stay in a completely enclosed and insulated barn for a week. After that, they stay in dome-shaped hutches designed to keep them warm and dry. And the milking parlor is insulated — for both cows and employees. “Cows can actually handle cold better than they can handle heat, in our experience,” he says. “We just try to protect them from the weather as best we can.”